This is part 1 of 6 blog posts on my grandfather’s home village of Hoffnungstal, Bessarabia (now Ukraine).

The village of Hoffnungstal, Bessarabia, (Nadezhdivka, Ukraine), was the last German mother colony created in Bessarabia. It was initially founded in 1842 by 25 families from the estate of Karlstal, part of the Freudental parish near Odessa. These families had first settled there between 1806 and 1819, but they were expelled in 1841, possibly due to the sale of the estate.

After leaving Karlstal, these families spent a winter in the Swiss-settled village of Schabo. This may have been intended as a temporary solution or it may have been the government’s intention for them to settle there permanently. However, the existing Schabo villagers objected to this because of the large number of German families (there were only 18 farmsteads available and 25 German families), religious differences, and disagreement over which land would be allotted to the new villagers.

Instead, the Welfare Committee (which managed German settlements in Tsarist Russia) decided in 1842 to settle the displaced villagers on the last available parcel of land, “Number 9,” in Bessarabia. (When Bessarabia first opened for settlement, a large influx of German families who had previously settled in Poland came there. Emigration from Poland had stopped by 1839, leaving this one piece of land, which was designated for German settlements, still open in 1842.)

This land was in the valley of the Karadai stream. At first, the settlement was known only as “Number 9.” In 1843, the new villagers, hopeful that they could settle in and prosper in this new place, named it Hoffnungstal, or Hope Valley.

From 1842 to 1848, 57 additional families joined the colony. These 82 families filled up the planned complement of settlers for this village.

The first 25 families received loans of 100 rubles from the Welfare Committee that had to be paid back, interest-free, in 10 years. Subsequent colonists received land, but had to rely on the capital that they brought with them. When the settlers first arrived, the steppe was bare of housing, forests, or crops. They built their homes using stone from the nearby quarry. 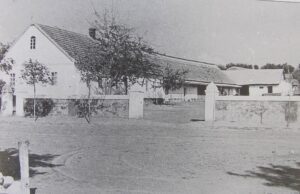 The Karadai is surrounded by alternating hills and valleys, and the site of Hoffnungstal was considered one of the most beautiful in Bessarabia. Hoffnungstal was located about 5.5 miles northeast of the German parish village of Klöstitz, four miles southwest of the Russian village of Nicolaijewka, about five miles east of the German village of Borodino, about 11 miles from the German village of Beresina (which would later be very important because of its railroad station), and 10 miles south of the estate and market village belonging to the Russian Countess Mansir.

Hoffnungstal was spread out for 3 kilometers, lying north to south along the Karadai. There were two main streets running north/south, one on the east side of the stream and one on the west side. The farmsteads or “Hofs” of the 82 families were situated on either side of the Karadai. Each farmstead had four acres along the small stream, which usually included a vegetable patch and fruit trees for household use. Across the road, the remainder of the farmstead included about eight acres. A gate from the street led into the farm courtyard, which was surrounded by the family home and barns. Homes in Hoffnungstal were generally 22 feet wide (but of varying lengths) and consisted of at least six rooms.

Within the eight-acre farmstead was included the yard, threshing floor, straw and haystacks, and potato and vegetable gardens. The largest portion of the yard was usually filled with cultivated grapes used for making wine.

Growth of the village

This growth was primarily from births in the existing village families—due to very strict village regulations, it was practically impossible for someone from outside the village to purchase land in Hoffnungstal. The local code called for the next of kin to have first rights to purchase land. Next in line was a member of the colony, and lastly was a German from another colony. Through the 1800s, no one from outside the village was able to purchase land or property. After 1900, a few families from other German villages and two “foreigners” (probably Russians, Romanians or Jews) owned land in Hoffnungstal.

“At Last – It is Possible to Make Visits to the Homeland.” Translated by Adam Müller. Hoffnungstal Newsletter (Vol 2 Issue 1) April 1996.

34 Responses to “Hoffnungstal, Bessarabia – History of a German Village (Part 1)”