This is part 2 of 6 blog posts on my grandfather’s home village of Hoffnungstal, Bessarabia (now Ukraine). 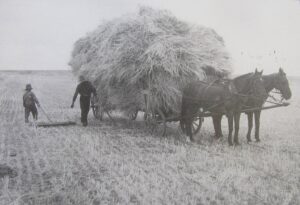 The land available for farming also expanded. The village was initially granted about 14,000 acres of land. In 1897, they purchased 675 acres, and in 1899, they purchased another 1,100 acres from Countess Tolstoi. They also leased a great deal of land from the Princess Gagarin.

The rolling hills surrounding Hoffnungstal made transport in and out of the village difficult, especially with heavily loaded wagons. But soil in the area was very rich and good for many crops with little need to fertilize it. The Hoffnungstal farmers practiced crop rotation, but due to the high quality of their soil, they didn’t need to let the ground lay fallow in alternating years. The land supported a number of different crops, including (as of 1940) wheat, barley, oats, corn, soybeans, potatoes, rye, castor beans, millet, sun flowers, rape, mustard, flax, beets, watermelons, and pumpkins.

“The people of Hoffnungstal were real farmers, plain, firm but open-hearted, just and hospitable … Land, land, was the password of the farmers of Hoffnungstal … To buy or rent more land was always the aspiration of Hoffnungstalers, since they had pride in farming. Their machines had to be modern and in good repair in order to carry on the work of growing grapes and grain …” (Hoffnungstal Heimatbuch, p. 29-30).

This hunger for land drove many Hoffnungstalers in the late 1800s and early 1990s to immigrate to the U.S., Canada, the Crimea, the Caucasus, West Siberia, and Brazil in search of new opportunities to develop their own land.

Commercial buyers bought wine directly from the farmers, however, the farmers had to haul their grain to the market themselves. Hoffnungstal farmers usually hauled their grain either to the train station at Beresina (about 11 miles) or to the county seat of Akkerman (56 miles). To get the best profit, some farmers took their produce to the large harbor city of Odessa (90 miles). However, this port was lost after WWI when Bessarabia (including Hoffnungstal) was annexed to Romania, while Odessa continued as part of Russia.

A farmers’ cooperative handled marketing the colonists’ produce. With Hoffnungstal’s agriculture as the main business and the marketing of the produce in German hands, the village was considered one of the most economically sound in Bessarabia. 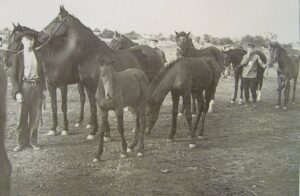 Sheep and cows and horses, oh my!

Hoffnungstal farmers raised animals in addition to agricultural farming. Sheep were popular for their low expense and high income from wool, cheese, and the sale of lambs. Some milk cows and beef cattle were maintained, although profits from cow’s milk were small and the primary market for beef cattle was in Odessa.

However, the pride of the Bessarabian farmer was the Bessarabian horses. “In Bessarabia the horse is like family … love and care are given to the horse ahead of all other animals.” (Diary of the Village Assessor of Hoffnungstal, Hoffnungstal Newsletter 3-3.) Farmers often owned large numbers of horses as this was a measure of their reputation and village standing.

Careful attention was paid to maintaining a good breed, and the favorite color to breed for was black. The horses were based on the old Arabian pure-breds. “The last breeding stallion from the upper village, a beautiful animal, was auctioned off for 63,000 Lei. This horse was taken to Germany with a few other especially selected horses.” (Hoffnungstal, p. 31) [Note: This was approximately $10,000 and probably occurred about 1940. This price would put the horse in the category of an exceptional stud of National Champion status.]

Hoffnungstal also had several mills used for making flour and oil. The first steam-driven mill was built by Friedrich Schott in the late 1800s. (He later sold the mill to finance his family’s immigration to America.) Farmers from many of the surrounding villages came to Hoffnungstal to use the mills.

Although the main occupation in Hoffnungstal was farming, there were many craftsmen in the village as well. Sometimes they practiced their craft as a sideline; sometimes it was their main occupation. In 1940, the primary trades represented included metal workers, blacksmiths, carpenters, cartwrights, shoemakers, harness makers, mill owners, and game keepers. There were also individuals who were coopers, tailors, brick makers, quarrymen, land surveyors, night watchmen, roofers, and midwives. There was also a butcher, a beekeeper, a truck garden farmer, a cistern finisher, and a gravedigger. “Roaming” craftsmen, who did work on a commission basis, included watchmakers, a sewing machine repairman, a pots and pans repairman, and a knife grinder. Moldavians often were hired as cattle herdsmen, and Russians did sheep shearing on a seasonal basis.

Hoffnungstal’s economic connection with the village of Beresina was especially important, because it was a source of wood for Hoffnungstal’s carpenters and wagon makers, as well as the nearest train station.

2 Responses to “Hoffnungstal, Bessarabia – History of a German Village (Part 2)”