This is part 4 of 6 blog posts on my grandfather’s home village of Hoffnungstal, Bessarabia (now Ukraine).

Memories of life in Hoffnungstal include much hard agricultural work. But there are also many stories of dances in the fall on the empty threshing areas with the musicians playing “zippy” dance music, the young men and women flirting, and the children playing at the edge of the dance floor. The upper and lower villages each had their own Kameradschaft or youth group that competed against each other. Each youth group had their own three-man band that would play for dances. And it was frowned on for a young woman from one youth group to marry a man from another! 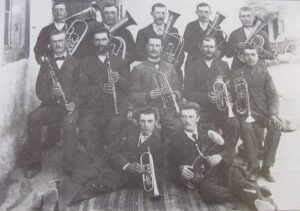 Favorite celebrations included the Mayfest and Easter. For the Mayfest, two huge trees or poles would be set up in front of the church and decked out with glittery tinsel. For Easter, the youth would play the traditional “Eierlesen” or Easter Egg game.

“It was the custom that one went to the Easter egg hunt at the festival square on the second day of Easter. There, under a flag, were four rows of fifty eggs laid out. Every ten eggs, there was a hard-cooked, colored Easter egg. The rows were aligned with the four compass points—orth, south, east, west. The state flag would have been raised next to the Bessarabian flag.

“Each egg-gathering group consisted of two girls and a young man. The young man gathers the eggs and put them in one of the girls’ apron. The other girls had to put the eggs in their baskets. At each colored egg, the gathering would be interrupted and the band would play a dance. The goal was to gather all the eggs as quickly as possible and throw the last egg over the flag. The group that first managed to do this was the winner. Afterward, everyone went to the community center where late into the evening one celebrated, sang, and danced.” (Bessarabian Newsletter 4-1. Written by Friedrich Ernst; contributed by Armin Flaig; translated by Carolyn Schott)

Compared to other colonies, Hoffnungstal had relatively few epidemics. Cholera claimed a number of lives in 1855. Also diphtheria, typhus, smallpox, and flu occasionally swept through the colony. Still, even without epidemics, the overall health situation in Bessarabia in the 1800s was bad. The dusty conditions in the field and roads caused a number of respiratory and lung diseases. The lack of sanitary conditions and prenatal care caused many women to die in childbirth.

Medical care was primitive. Most medical care was done in the home and was based primarily on prayer and home remedies. Although settlers started arriving in Bessarabia around 1812, the first doctor did not arrive until 1830. Up until the 1900s, the few available doctors were located only in the largest towns. In 1860, the nearest doctor for Hoffnungstalers would have been in Tarutino, approximately 16 miles away.

Long before the Internet…

Typical of frontier communities, communication and transportation services were also fairly primitive. With the opening of the Bender-Reni rail line in 1878, the mail began to be delivered daily to Leipzig. Someone would pick up mail in Leipzig and deliver it to the Tarutino post office. Surrounding villages had to pick up their mail from there.

Prior to 1878, mail arrived only weekly and had to be picked up from as far away as Sarata (about 45 miles) or Kauschani. Tarutino also received a telegraph office in 1877, and a telephone office a few years later.

2 Responses to “Hoffnungstal, Bessarabia – History of a German Village (Part 4)”