This is the final of 6 blog posts on my grandfather’s home village of Hoffnungstal, Bessarabia (now Ukraine). 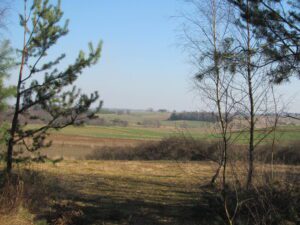 The areas of West Prussia and Posen/Warthegau in northern and western Poland had been directly annexed to Germany. By the first part of 1941, the SS had expelled close to 400,000 Poles from their property in these areas, intending to settle ethnic Germans, including the Bessarabian refugees, there. With these lands available, most of the former Bessarabians were resettled and left the refugee camps fairly quickly. The uprooted Poles, many of them dying en route, were sent to the “General Government” or central and southern part of Poland, which was now occupied and administered by the Nazis.

Pawns in the Nazi settlement plans

The people of Hoffnungstal were told that the delay was due to the death of their mayor, Immanuel Aipperspach. However, coincidentally, during this same time the Nazis were revising their settlement policies. Anticipating Nazi victory, they were planning for the “Re-organization of Europe,” which included settling the General Government area with ethnic Germans. In late 1942 and 1943, more Poles were expelled from the Zamosc-Lublin area, many of them being sent to concentration camps or conscripted for labor.

The Hoffnungstalers were then given the choice of remaining in refugee camps for the rest of the war or being settled farther east than the other Bessarabians, in the General Government area nearer the war front. Desperately wanting to leave the refugee camp, not fully aware they had become pawns of the Nazi settlement policies, the people of Hoffnungstal, along with another Bessarabian village, agreed to be settled in the district of Lublin/Zamosc in December 1942—a small group of 4,000 ethnic Germans in the heart of Poland, surrounded by Poles with good reason to hate and fear anything German.

What mixed emotions the former Bessarabian Germans must have had as they settled into their new homes and became more fully aware of their situation. Relief that they were out of the refugee camps and able to work again as farmers and craftsmen. Justified in taking over these Polish farms, as they had left behind their own long-established and prosperous farms with the promise that they would be compensated for what they’d left behind.

And yet what dismay they must have felt knowing that the Poles had been forced from their homes and were now working for the German farmers as day laborers in what once were their own fields.

The Poles, terrified by the expulsions by the Nazis and probably fearing that they would soon suffer the same fate as the Jews, formed partisan resistance units and struck out at anything German—making no distinction between the SS and the Bessarabian Germans whose only motivation was to be able to farm and work their own land again.

For more than a year of living in this area, the German villagers were constantly terrorized by Polish partisans setting their homes on fire by night and other violent acts. All men ages 18 to 65 kept a nightly watch and rarely got a full night’s sleep.

The attacks got so bad that the Germans asked the district SS commander to send the women and children to safety in Germany and the men would enlist in the army where they could “at least see the enemy in front of them.” They never knew which direction a partisan attack would come from. The SS commander told them to stop their complaining, sling a gun onto their backs and get behind their plows. After all, they were “front-line farmers.” An especially tragic set of attacks in June 1943 resulted in a large number of deaths in just one or two nights.

In 1944, the Russian army was advancing and the partisan attacks became even more brutal. Finally in March 1944, the women, children, and elderly were sent west for safety in refugee camps near Lodz. The men were required to remain in their Zamosc homes to fight and start that year’s crop. Finally in July, the battle front was advancing too quickly and the men headed toward Lodz with whatever possessions they could put in wagons. Many of the men of Hoffnungstal either died or were imprisoned by the Russians during the flight to Lodz. Those that made it to Lodz were either drafted into the German army or into labor battalions to build entrenchments.

The last chaotic flight to escape the advancing Russian army occurred in January and February 1945. Leaving most of their possessions behind, they fled with whatever was available—wagon, some trucks, or on foot—toward Germany. Fifteen of the people from Hoffnungstal died as they fled ahead of the advancing war front. Another 23 people either disappeared while fleeing or may have been overrun and captured by the Russian army. (The specific fates of all of these people are not known, but some are known to have been deported to Siberia.) 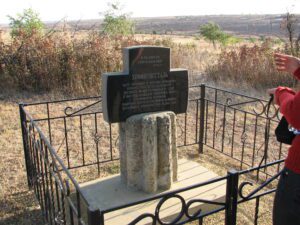 Memorial in the Hoffnungstal cemetery. Photo courtesy of Gayla Aspenleiter.

Although the majority of the 2,088 Hoffnungstalers who were resettled in 1940 survived the war, after WWII they were scattered throughout Germany and were no longer a unified community. With the post-war division of Germany into East and West, many families were also separated by these political barriers.

Visits to Bessarabia, as part of the Soviet Union, were officially impossible until 1993 when Ukraine took over this territory (although some clandestine visits may have occurred). In particular, the site of Hoffnungstal was used as a restricted military area by the Russians and was therefore off-limits. Sometime after the Germans left, the Russians flattened the village (possibly using the deserted village for target practice during their training exercises) and the cemetery gravestones, and set up a military base and power station nearby. (It’s also possible that the village buildings were already damaged from an earthquake that occurred soon after the villagers first left in 1940.)  The only structure that remained standing as of 2001 is the schoolhouse, which was taken away from its original location to be used as part of the power station.

8 Responses to “Hoffnungstal, Bessarabia – History of a German Village (Part 6)”