I just discovered something that Seattle and Europe have in common—very diverse cultures living side by side.

It fascinates me how one can experience the laid back and random culture of Italy (“let’s drink some wine, go to the beach, ignore every traffic rule and park on the sidewalk”), then drive an hour and be surrounded by Swiss efficiency, orderliness, chocolate, and cuckoo clocks. But an evening in Mercer Island made me realize that right here in Washington we have an equally diverse set of cultures just a bridge apart. I-90 bridge from Seattle to Mercer Island

I don’t usually go to Mercer Island. Of course, I’ve driven across it every time I take I-90 which is frequently enough. I’ve had friends and family live there, and have gone to their homes. I’ve scoped out the drive-through Starbucks for when that coffee urge hits halfway to the Eastside.

But until last weekend, I never really went to downtown Mercer Island, got out and looked around. It was Mercerversary (the 50th anniversary of Mercer Island incorporating as a city) and a friend’s band was playing, so a Mercer Island friend and I decided to check it out.

Mercerdale Park was Stepford Suburbia at its finest. In the huge crowd that filled the park, I probably saw only about 10 faces that weren’t white Caucasian. (Even my recent family reunion of ethnic Germans had more diversity than this crowd!)

The affluence of the area was apparent from the high quality of lawn chairs (some were wicker, some of the more typical canvas chairs came equipped with an ottoman-like extension). People had spontaneously arranged these neatly in regular rows.

The police on duty looked bored. The only call they responded to was at the children’s bouncy house. There were dogs, there were children, there were skateboarders. But all were orderly, not shouting or barking or running through the crowds. People proudly wore their “My Mercerversary is _____” stickers showing how long they’d lived there as they wandered around wearing birthday hats and eating cake.

There was a nice, clean family fun feel to the event that should have felt safe and comforting. (At least when I got jostled in the crowd, I could be confident no one was trying to steal my wallet.) But even walking through the downtown area toward the park, the buildings were a bit too modern and perfect and clean. It all felt eerily sterile.

By contrast, about a month ago I went to the Solstice Festival in Fremont. “Renowned as Seattle’s most artistically eccentric community, Fremont wavers somewhere in time between the 50s, 60s and the 23rd century.” 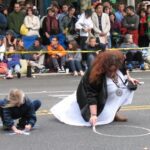 Chalk drawings in the street while waiting for the parade to begin.

Fremont claims its place as the Center of the Universe and has the mileage signs to prove it. It hosts a statue of Lenin (purchased from a town in Slovakia, just because), a rocket, a troll under one bridge and a neon Rapunzel letting her hair down from another. The streets are lined with quirky stores, art galleries, and great restaurants and bars. 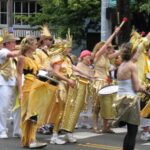 Solstice drummers lead off the parade.

The annual Solstice Festival parade starts off with dozens of naked (yes, they really are) bikers, painted in various ways to hide or enhance their nakedness. Between the naked bikers and the start of the parade, children in the crowd are given colored chalk and encouraged to draw pictures in the middle of the street. 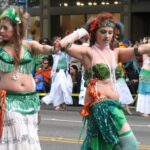 Instead of marching bands, the parade had a solar-themed drum group and a Caribbean steel drum band. Instead of drill teams, there are belly dancers. Instead of traditional floats, an erupting volcano rolls down the street. It’s sometimes hard to tell who in the crowd is in the parade and who just decided to dress up like a zombie to watch from the sidewalk.

Fremont isn’t comforting. It might even put you a bit on edge. But its eclectic quirkiness is completely alive and invigorating…not a bit sterile. Sorry Mercer Island, I think I’ll stay on my side of the bridge.