I don’t usually post recipes, but since there was so much interest in yesterday’s post about my baking powder dilemma and so many people desperately searching for this recipe, so here goes.

Now, I’m not calling you a dummy, but I certainly was when I first tried to make it. My mom didn’t really use recipes and mostly said things like, “You add water until the dough is right.” Right? What does that mean? It made sense to her, but not to me. So I decided to put together a recipe that spelled out every detail.

This recipe evolved over time, starting with shadowing my mom. But I could never get the dough stretching down until I got some lessons from my dad’s cousin Marie and she showed me an easier “beginner” method (holding the dough by the edge and letting gravity work for me rather than flipping it around on the backs of my hands like mom did). Once I found Aunt Idella’s recipe (that called for resting the dough), I made my first successful batch. 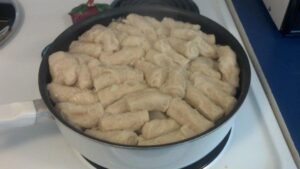 With strudels as your main course for heavy-duty strudel-eaters, I usually estimate about 1 cup of flour per person. So this recipe serves about 3. If you’re having other dishes, or you’re more “average” strudel consumers, you would adjust accordingly.

1) Mix eggs, water, salt. Add flour & baking powder to make soft dough. (Be careful that it really is a soft dough, too much flour makes the strudels tough. If it’s annoyingly sticky, it’s about right.)

5) Roll out each ball of dough. Pour small amount of oil (don’t use melted butter) in the center of piece of dough. Fold edges into middle to cover the entire top of the dough with oil, but let it lie flat. (Basically, you just want to let the oil help soften up the dough for stretching.)

6) Let dough rest about 15-20 minutes. At this point, start cooking the potatoes and onions slowly so the water will be simmering by the time you’re ready to put the strudels in the pot. (Some people also cook their meat in this pot and if so, you’ll want to start it sooner. I usually do my meat separately to simplify the timing of it all.)

7) Stretch dough until paper thin, either on the backs of your hands flipping it like pizza dough, or just by holding the edge and letting gravity stretch it. The oil makes it stretch pretty easily, sometimes too easily! When it gets hard to handle, I lay it down on a large cotton dish towel and stretch the edges out a bit more. It’s not the end of the world if it tears some…main thing is to get it stretched thin everywhere, even the edges.

8) Start rolling one edge of the dough, then pull the dish cloth up to let the dough “automatically” roll up.

9) Cut into approximately 2” lengths. Lay strudels on the top of the potatoes; the water should already be boiling. Try not to let strudels lie on top of each other and keep them from being completely submerged in the water. The potatoes should act as a “platform” for the strudels to lie on and steam. Cover and cook ½ hour without taking the cover off.

10) Serve with gravy and any meat dish you might choose to add.

35 Responses to “Strudels for Dummies”