This update was the first thing I saw in my Facebook feed that morning two years ago. I’d woken up determined to cut back on my obsessive reading of news about Ukraine’s Maidan Revolution. Since the day in November 2013 when brutal beatings by police had sent peaceful protesters fleeing to St. Michael’s church for refuge, the first thing I’d done each morning and each evening after work was scour Facebook and Twitter for news from Ukraine.

I cheered on the bravery of the Maidaners in their persistent demonstration against the corrupt Yanukovych government, wanting something better for their country and their lives. I was horrified at news of mysterious disappearances, torture, and suppression laws that violated individual freedoms. The news that people were losing their lives to brutal riot police and snipers made me weep. I did what little was in my power (mostly writing and tweeting to U.S. and EU officials) to support their courage.

I’d traveled to Ukraine multiple times. I had friends there. I’d walked the streets where the revolution was happening. My heart was in Ukraine. But sitting at my breakfast table in Seattle that morning, I’d told myself that reading the news obsessively wasn’t helping anyone in Ukraine. I needed to focus on my own life rather than events thousands of miles away that I couldn’t change.

“I’m dying.” The voice of a young woman, shot in the throat. So much more poignant and immediate than a detached news report published hours and days after the event.

I gave up any idea of detachment. Hour by hour, I watched the tragedy unfold as the government threatened the protesters, international officials tried to negotiate peace, and Yanukovych brought in snipers, killing about hundred protesters. I couldn’t do anything. I was thousands of miles away. But somehow, knowing what was happening, praying, I felt like I had a very minor walk-on role in these faraway events.

My heart was in Ukraine, at Maidan, through the winter of 2013-2014. So when my body was finally able to go to Ukraine in October 2014 (as an international observer for their elections), naturally, the first place I wanted to visit was Maidan. 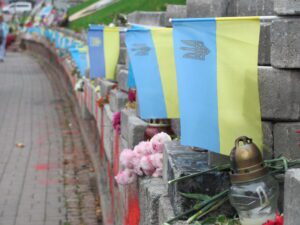 Memorial to the Heaven’s Hundred

I don’t know what I expected, but Kyiv was deceptively normal. People walking their dogs and children playing in Mariinsky Park. People in coffee shops, talking on their phones, walking through the streets to work.

Police wearing bulletproof vests were numerous on the streets around Maidan, as were men in military outfits. Large photo displays documented the presence of Russian troops in the east. Body-shaped outlines on Hrushshevsky Street showed where the first people killed in this revolution had died.

The memorials to those killed at Maidan, the “Heaven’s Hundred” as they’re called, are covered in icons and flowers. These are fresh scars in people’s memories—sons, brothers, husbands who will never come home again because they believed in a Ukraine of freedom and justice.

My friend Natasha participated in Maidan. She brought life to some of the names and photos as she pointed to each—this man was a beloved teacher who came to Maidan each day after school; this young man had decided to give up and go home, but then turned around and came back to Maidan … only to be shot hours later. Real people with real families mourning them. 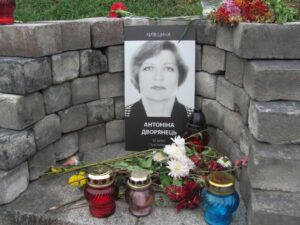 The memorial that brought me to tears was the one for Antonyna Dvoryanets. As a volunteer for Voices of Ukraine, I’d edited the translation of her story. She went to Maidan every day, bringing food to help feed the protesters and was killed there on February 18. Somehow, editing the story made it more personal for me than simply reading it. I found myself dripping tears as I marked corrections in red pen.

Standing on Maidan that cold fall day in Kyiv, I gazed at Antonyna’s memorial and heard her daughter’s words in my head: “I want my Mom. Anywhere, just take me to my Mom.”

Glory to Ukraine. Glory to the heroes.

3 Responses to “Pilgrimage to Maidan”