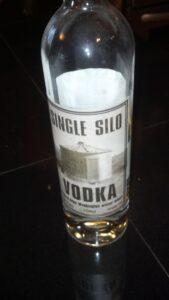 Yes to Seattle vodka! I’m finding we have some great local distilleries.

My decision to boycott Russian goods was an easy one. Russia is invading Ukraine. My travels to Ukraine have made the country and its people dear to my heart. So it was natural to do anything I could to support Ukraine and thwart Russia.

I discovered that my boycott was easier than I’d thought it would be. So easy that it was actually a bit frustrating to make my stand. In my life in Seattle, there are very few Russian goods available to buy (unless I purposely go to the Russian grocery). There are no Russian Lukoil stations that tempt me to buy gas. The only thing I’ve found to boycott with any regularity is Russian vodka.

This has turned out to be more of a conversation starter than a sacrifice. When I order a Cosmo or any form of vodka martini, I inquire about the brand of vodka saying, “I’ll drink anything except Russian vodka.”

Almost every time, the server asks me, “What’s wrong with Russian vodka? Is there an ingredient in it you don’t like?” I take this as an opportunity to explain about Russia’s war mongering—information that isn’t always that visible on the nightly news in the U.S. My boycott might not be impacting the Russian economy, but it’s helping to educate people about what Russia is doing.

Of course, outside the U.S., it’s a different story. I ordered a Bloody Mary at a brunch in Amsterdam saying, “But I won’t drink Russian vodka.” The waiter looked at me, paused, then nodded at me with an “I get it” look.

“How about Polish vodka?” he asked, naming a country that is one of Ukraine’s strongest supporters.

There were 190+ Dutch citizens on board MH-17, the airplane that the Russian terrorists shot out of the sky over Ukrainian territory.

Yes, they get it in Amsterdam.