I just got off the phone with the White House. I was telling President Obama (via the citizen comment line) my opinion of Russia’s invasion of Ukraine and the U.S.’s inaction.

Most articles about how travel changes you enthusiastically describe expanding your horizons and understanding other cultures. While I do believe that’s true, travel has changed me in a much more fundamental way—I’ve become a political activist. Falling in love with Ukraine

Thirteen years ago, I traveled to Ukraine for the first time. I didn’t expect to like it. I expected it to be grim and Soviet. I never expected I’d go back.

But I fell in love with the warmth and hospitality of the Ukrainian people who I met. Even those who had little, openly shared what they had with us. I learned about their struggles and dreams. I learned about their frustrations with the corrupt system and politicians they inherited after the breakup of the Soviet Union. I found myself going back to Ukraine over and over again.

When the Maidan revolution in Kyiv started, the Facebook postings from friends made me realize the western media was ignoring what was happening or distorting the facts. I had the chilling feeling that I’d gone back in time to my Cold War-childhood as I read about the Yanukovych government using all the techniques (torture, terror, secret surveillance, brutal police) of the supposedly extinct Soviet Union. Death and destruction were happening on streets where I had memories of a sunny March afternoon sipping coffee and talking with a friend; watching another friend pose for silly tourist photos with a parrot on her shoulder. 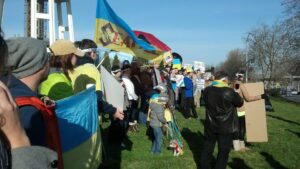 My first ever protest, supporting Ukraine in Seattle, January 2014

I’ve always thought protests—standing on a sidewalk holding a sign—were sort of a lame way to effect change. But as I watched peaceful protesters in Kyiv fleeing to churches to escape brutal beatings by police or standing up for their freedom armed only with rocks (cobblestones they’d pried from the streets) and barricades of burning tires against armed riot police, I knew I couldn’t just stand by. I had to do something.

I couldn’t go and stand on the Maidan in Kyiv, so I went to a protest—my first ever—in the shadow of Seattle’s Space Needle, waving a blue and yellow Ukrainian flag and shouting “U.S. support Ukraine!” I started participating regularly in organized online protests, “Twitter storms,” tweeting urgently to prominent figures in the U.S., Europe, and the media to support Ukraine. I felt almost proud to be targeted by Russian trolls who called me hateful names and accused me of being a Nazi and fascist, and enjoyed slapping them down with facts, 140 characters at a time on Twitter.

As Russia invaded Crimea and eastern Ukraine, I stepped up my efforts. I tweeted Obama and John Kerry over and over. I wrote emails to the White House. I wrote emails to senators and my Congressman. I looked up the members of the Senate Foreign Relations Committee and wrote emails and tweets to them.

I even spammed Angela Merkel one day, joining other supporters of Ukraine in pointing out the dangers of Germany and the EU continuing to appease Putin. I’ve been posting a never-ending stream of articles and prayer requests about Ukraine on my Facebook page, carried a Ukrainian flag on a hike up Mt. St. Helens to show support, volunteered as an editor for a team that translates news about Ukraine to English and publishes it online. 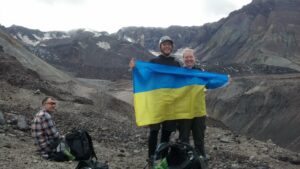 Slava Ukraini! I brought the Ukrainian flag on a hike of Mt. St. Helens.

I know my friends think I’m obsessed, even a little crazed. Some admire my passion and look to me as a reliable news source. Others are no doubt sick of hearing about Ukraine and wish I’d stop talking and Facebooking about it, unable to understand my fascination with this country even though my ancestors came from there. And despite my frequent (one-way) communication with President Obama, I haven’t gotten a call to drop by the White House for coffee.

But I can’t forget the people I’ve met in my travels to Ukraine, people who just want a less corrupt government and the everyday freedoms I take for granted. People who want the opportunities that the West offers, not the increasingly Soviet-style repressions of Putin as Russia tries to grab control of Ukraine.

Behind the Iron Curtain

I also can’t forget the peeks behind the Iron Curtain I’ve gotten on my travels—the family in East Berlin in 1983 who showed much more than parental fright when their young child wanted to make friends with our group of Americans in a public park. Or the tour guide in Belgrade in 1983 who took our student group to the middle of an enormous square as that was the only place she could speak freely without anyone overhearing what she was telling us about life in Yugoslavia.

On a trip to Kyiv in 2005, one of the guys in our group talked to a street vendor selling military memorabilia. My friend had been in the U.S. military (army, I think). The Ukrainian said he’d also been in the army, and explained, “We were taught to hate Americans, to hate people like you.” My friend gulped, but admitted, “We were taught to hate you, too.” The two men stared at each other for a moment, and then found themselves giving each other a big bear hug in the middle of the sidewalk. “There is no need to hate anymore,” they agreed. How travel changed me

Sure, when I’ve traveled places, I’ve learned about and embraced new cultures. But my travels to Ukraine have made a much deeper impact on me. I’ve come to care enough about these freedom-loving people to come out of my political shell and vocally stand up for what I believe. It’s wrong and evil that Russia has invaded Ukraine. It’s wrong that Russia lies on a colossal scale about their invasion and brutality. It’s wrong that Russia wants to pull Ukraine back under its control, repressing freedom and hope. It’s wrong that Western nations are not reaching out in more concrete ways to help Ukraine from being raped by Russia.

And now, off to write to more senators.

2 Responses to “How Travel Changed Me”