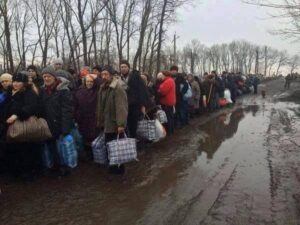 I feel like I’m in a WWII novel. One friend mentioned posters going up in public places like schools, directing people to the nearest bomb shelters. Another friend spent a recent vacation with her family discussing evacuation possibilities and the necessary emergency supplies to stock in case their city gets bombed.

The WWII Blitzkrieg of London? The 1939 Nazi invasion of Poland?

No, this is happening in the 21st century in the European country of Ukraine. These are real events that friends of mine—friends who I’ve shared meals with and stayed in their homes or they’ve stayed in mine—have told me about in the last three days.

It’s unbelievable to me that my friends should have to worry about this. Almost as unbelievable as the fact that I am participating in Twitter protests and writing the White House urging the U.S. to take military action. Me, who is really freaked out by guns and thinks the U.S. is overly prone to want to interfere militarily in places we have no business. I hate the very idea of war. But I also hate watching people in Ukraine getting killed because Russia has decided to have a war.

Am I biased about Ukraine? Sure. When you have friends who are facing having their homes bombed, it gets personal. But I also think there are numerous reasons that getting involved in Ukraine helps not only Ukraine, but serves the best interests of the U.S. and Western world. (1, 2, 3 thoughts on why.)

I was reading an article recently that talked about how, in the 21st century Western world, we’ve moved beyond physical, missiles and guns type of war in favor of civilized, economic war. The article said there was no excuse for losing lives over a fight for mere territory. Unfortunately, Putin doesn’t seem to have read this article. The article went on to talk about how uncivilized it would be for us to counter Putin’s aggression in Ukraine because it was a mere land grab.

It’s not merely a pissing match over geography. Putin’s war is affecting the people who live on that land.

News media seems to focus mostly on battles and casualties. But what breaks my heart are the photos of people forced to flee their homes with the little they can carry. Do these people care about geopolitics? Do they care about geography?

Sure, Putin is killing many soldiers on the battlefield. He’s killing civilians in neighborhoods and bus stops with missiles. But his war is also killing the hopes and dreams and lives of everyday people, even if they never face a bullet. Fighting this war is not about territory, it’s about preserving people’s lives—physically and emotionally. 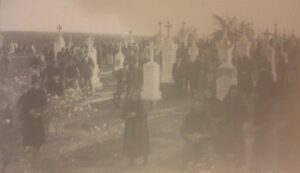 Villagers say a last farewell as they leave behind the village of Hoffnungstal, Bessarabia, (now Nadezhdivka, Ukraine) in 1940.

Another flashback to WWII history and the stories of the Umsiedlung, when my own German ancestors were forced out of their homes in Ukraine. Leaving behind everything for which they’d worked for generations. Leaving behind their lives. Being set adrift in the midst of war as they were shuttled to refugee camps, to temporary homes, and to more refugees camps as they fled another army.

Another generation is being cast out into a sea of war and uncertainty. History repeats itself over and over again, destroying people’s lives. When will we learn? Who will stop this evil?