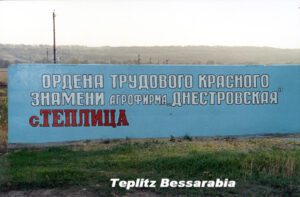 The hospitality was bounteous, if not terribly personalized. A short visit with the mayor and his wife, then they handed us over to the guesthouse where we’d be staying that night. As with every Ukrainian meal, plates of food covered every square inch of the table’s surface. But the guesthouse owner hovered over us like she was daring us to eat and the odd smell permeating the building put a damper on my appetite.

Serge had sworn to me it was just sulfur in the local water that created the smell. But my nose told me “sewage,” not sulfur-rotten-egg smell.

I knew I should feel honored that Elli, Elaine, and I had been given the “suite” with its private bathroom. The other alternative was simply to rent a bed in a common room (currently filled with male Ukrainians) and use the bathroom down the hall. But the dubious glamour of a suite in Teplitz evaporated quickly when we found out we couldn’t use the toilet (apparently it wasn’t actually connected to any water/sewer system) or the bathtub (ditto). Fortunately we could use the water in the sink, though the cold water gushed out in a stream of black and the hot water wasn’t. From the constantly dripping faucet, the abundant smell of this sewage-smelling water permeated our room. 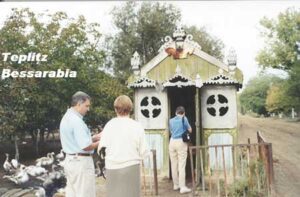 The town’s well house was decorated and ornate.

It was early for bed, but there was little to do in Teplitz once it was dark. Without streetlights, the moon and stars didn’t produce enough light to stroll the pothole-filled streets or broken walkways without risking a broken ankle. But Serge and Peter had a plan for the evening—they suggested we all talk over beers they’d brought back from a local store. 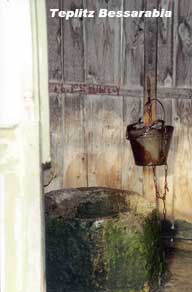 The “aromatic” smell of Teplitz’s water drifted out from this well.

which was a rickety wooden structure with a small triangular hole through the floor boards that was so small it was apparent people missed the hole more often than hit it. I shook my head.

“No thanks, I don’t want any liquid in my body.” I’d drunk sparingly all through dinner to avoid using that outhouse more than was necessary.

Serge tried to reassure me. “It is only beer. There is not that much alcohol in it.”

He obviously didn’t get it. I explained that I didn’t want to drink any liquid, not even water, since I had no desire to visit that outhouse. He burst out laughing, then rattled a bunch of Russian off to Peter, who then joined him in laughing. I’m glad I could amuse them. I went to bed.

And just barely woke when Elli returned from talking and drinking with Peter and Serge, whispering to me about the cockroaches they’d seen in the room where we’d had dinner.

I’d already consciously chosen to ignore the fact that my sheets, though apparently freshly laundered, reeked of the sewage-smelling water and had stains all over them. Cockroaches weren’t enough to disturb me at this point. I merely groped over the side of the bed to be sure my backpack was firmly zipped shut so I wouldn’t take any six-legged visitors with me when we left the next day.

Despite having drunk almost nothing, I found myself wide awake in the night, not once but twice, desperately needing that horrible outhouse. I survived both trips by doing something I would never have imagined before. Even though we were in the middle of a town and I’ve always thought I was a civilized person, I avoided the outhouse by simply peeing in a corner of the yard. Hey, it was dark.

A night in Teplitz is a travel experience I won’t soon forget. Or probably repeat willingly. But it has left me emotionally prepared to casually endure some pretty terrible toilets in my travels without flinching. Nothing like traveling to an ancestral village in rural Ukraine to open one’s mind to the possibilities of rustic toilets.

3 Responses to “…and a Night in Teplitz”