I was recently asked the question “What makes you the most nervous?” The answers included:  A) Making a presentation to 500 people; B) Meeting your company’s president; C) Taking a long car ride with someone you’ve just met.

I’ve done both A and B, and am over being nervous about those. I’ve done C, too, a couple times with someone who didn’t even speak my language. I can imagine dreading the ride if the person was boring or obnoxious, but not being nervous about it. So I pondered what would really make me nervous…and remembered a train station in Slovakia.

I was alone at night in an eastern Slovakian train station. Well, not entirely alone—the local drunk was bouncing gently off the walls, circling for the fourth time. My ride was five hours over due. My contact was not answering her cellphone. Sleeping in the train station wasn’t appealing, I didn’t know where to find a hotel, and none of the destinations on the departure board seemed like an answer. Moldova in the middle of the night seemed a worse idea than staying here in Košice. 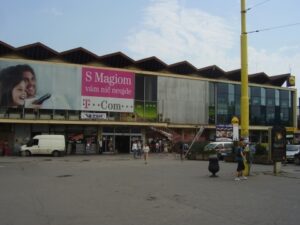 The plan had been for a friend of a friend to arrange a ride for me over the border to Uzhgorod, Ukraine. But within minutes of my train arriving, I was the lone person still on the platform. The small train station had that Soviet feel—utilitarian, lots of echoing cement, no handy English translations. And no one running toward my already departed train, trying to find their missing American.

I waited patiently for awhile because Eastern European sense of time is a bit casual. But finally I decided I should come up with Plan B.

The information desk was a little short of information. There was a creaking sound as someone slowly lifted themselves from a chair out of my view, then a long pause before a stolid Slovakian woman peered out at me through the small window. She said something I didn’t understand.

“City map?” I asked. Long slow shake of her head. It seemed to say not only “no,” but also “Why would we have something like that?” 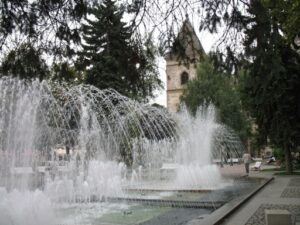 A fountain in the charming center of Kosice.

“Hotels? List of hotels in Košice?” Again, the slow shake of her head.

We stared at each other silently. She finally relented from her determination not to divulge anything. “City, there” and she pointed out the door of the train station. I think I could have figured that one out for myself.

At that moment though, my cellphone rang. It was Tanya. Her explanation:  “The driver did not show up. Do you mind waiting two more hours?”

In my previous visits to Ukraine I’d come to love the people for their warmth and generosity, but not necessarily for their organizational skills. I knew it was very Ukrainian for the driver simply not to show up—and for it to take three hours for someone to realize that. Though geographically still in Slovakia, I’d entered the Ukrainian zone.

With time to kill, I walked into town for dinner. Promptly two hours later I was back in front of the train station, waiting. No one appeared.

With my luggage beside me, I looked like an average waiting traveler. Still, loitering in front of the train station felt a bit sleazy. Or like a scene from a bad Cold War spy movie as the woman in the ultra-short skirt lighting her cigarette and the men in black jackets leaning against the wall all pointedly ignored me. I used the darkness as an excuse to move inside.

Everything was closed except a small food kiosk and a bookie joint taking bets. I was soon able to pick out which people entering the station would duck into the door of the bookie kiosk by how they hurried in, eyes to the ground, surreptitiously pulling money from their pockets.

Periodically a wave of respectable-looking travelers would flow in and out of the station as a train arrived and departed. But the little burst of legitimate activity dissipated quickly, leaving behind those of us adrift in the night with nowhere to go.

At the five hour mark and after the drunk’s fourth circuit and second attempt to get money from me, it was time to move on. I was a woman alone with nowhere to sleep. I wasn’t even sure where to find someplace to sleep as I hadn’t seen any hotels when I went into town for dinner.

I was surrounded by people who would have made me uncomfortable in Seattle and seemed downright scary in eastern Slovakia. I needed to be going somewhere, not simply to be hanging suspended between destinations. I gathered my luggage, an upscale bag lady with all my worldly possessions, about to set off into the dark hoping to find a hotel somewhere. 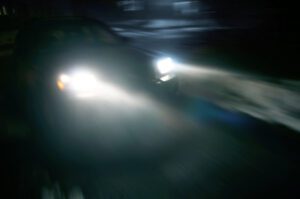 At that moment, Volodya burst through the entrance, walked straight to me, and grabbed my luggage to take to his car. Once I was sure Tanya really had sent him, I was relieved to follow and to escape the train station.

Volodya settled me in his car, scolded me for trying to use a seat belt, offered me gum, cranked up the CD player with oldies tunes, and we were off. The Mercedes hummed as it accelerated, faster and faster through the absolutely black night of the empty countryside, headed for the Ukrainian border. The headlights formed a tunnel and the darkness flowed around us. The danger of the speeding car on the winding road seemed trivial. I was in a bubble, safe from the night inhabitants of the train station, so isolated that the minty gum taste in my mouth and the CD player blasting “Woulda, coulda, shoulda, baby, baby, baby,” seemed the only real things around me. I was finally on my way somewhere, no longer adrift.

(Photo of the Košice train station was used with the permission of www.slovak-republic.org.)

3 Responses to “Adrift in the Night”