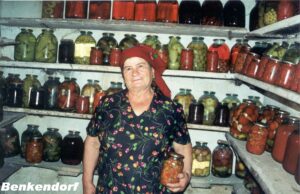 The stout, kerchiefed woman took one look at the Americans appearing in her village and whisked herself away from the group gathering around our van. It couldn’t be something we’d said, because we hadn’t said a word. At least, not one she would have understood.

The four of us stood by as Serge our interpreter explained to the small group that we were visiting from America, our ancestors had lived in this village, and we were interested in seeing any remains of the old German Lutheran church and cemetery. The conversation around Serge gained energy, volume, and some energetic hand motions as they gathered around an old village map debating which buildings on the map might still exist.

I noticed that the stout woman had returned, dressed in a brighter dress and fresh headscarf. She’d obviously changed into her best outfit, bent on scoring the local hostessing prize by landing some Americans. My friend Elli was soon caught up in the overwhelming tide of her Ukrainian hospitality and followed her new friend down the road. She called back over her shoulder, “I’ll be right back. She said she wanted me to try her schnapps.”

As Serge came to the conclusion we wouldn’t find what we were looking for, he tried to gather his wayward Americans back into the van, but of course, Elli was missing.

“She went that way,” I said, pointing. “For schnapps.”

Shaking his head, Serge gestured me to follow him as he led the way down the road, through the gate, and into the yard of the home where Elli had disappeared. Our kerchiefed woman smiled enthusiastically when we knocked, two more captives to her hospitality. The table was spread with small fish, bread, vareniki, and large water bottles that could only contain schnapps. The woman’s husband and adult son were sitting across from Elli who looked a bit helpless.

“Explain to her that we can’t stay. She just said schnapps, I didn’t expect a meal. And she won’t listen to me.” We drank schnapps, ate vareniki, and looked at the family photos

Rather than trying to ease us out of there, Serge shrugged in resignation. “Everyone has to have at least one experience like this.” He said something in Ukrainian, the woman beamed, and brought out more glasses. We spent a cheery half hour nibbling on vareniki, sipping vodka, and looking at family photos. She chattered away the whole time, apparently not caring that we didn’t understand her, just delighted to have landed the American guests in her home. After a tour of her cellar of preserved fruits and vegetables, Serge finally eased us out the gate and back to our van, finally ready to move on to our next destination.

Benkendorf had been an impulse stop for us, not one of our main destination villages. But it became one of our more memorable stops…and our first lesson in not fighting the tsunami of Ukrainian hospitality.