On Saturday I had lunch with Queen Victoria in Asia.

One of the interesting things about Istanbul is that the city is located on two continents – Europe and Asia – separated by the Bosphorus, which connects the Black Sea with the Sea of Marmara (and eventually the Mediterranean). So to hop to another continent for lunch is no problem at all.

Although the mixture of east and west is obvious throughout the city (seeing a woman in a hijab texting on a cellphone, the competition between the call to prayer from a minaret and George Benson’s “On Broadway” from a radio), it’s a bit disappointing to reach the other side of the river and realize that Asian Istanbul looks pretty much like European Istanbul. The traffic’s the same, the architecture is the same, and the restaurants have pretty much the same menus. 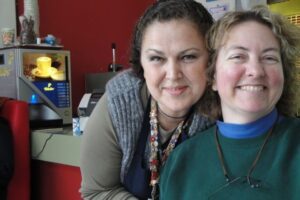 Me and Queen Victoria, at her day job

But not all restaurants have Queen Victoria working there. And she was in Asia that day. Well, okay, the real Queen Victoria is long gone. But our server that day is also an actress and portrayed Queen Victoria in a recent  movie called “The Sultan in Europe.” She even showed us the photos on YouTube.

One thing that was refreshing about the Asian (non-tourist) side of the city is that we got out of the crowds for a bit. We’d wandered the Spice Bazaar and edges of the Grand Bazaar that morning. The Saturday crowds were massive, not just tourists, but locals out for some shopping. We narrowly missed being engulfed by Turkish women shopping for purses. When a vendor pulled up his cart, announced (I assume that’s what he was saying) a sale, and held up the latest fashion (huge purse with a long tail – fox? cat? who knows…) those women dived on the pile of purses like seagulls diving for a scrap of bread.

So it was a relief to cruise on the uncrowded river, chat with the queen, and have a little lunch before diving back into Saturday afternoon Istanbul crowds. The underground passage under the main street was the most amazing…and frightening. If I could have turned back, I would have. If I could have paused long enough to take a photo, I would have. But either action would probably have resulted in death by trampling. Kathy and I just let the crowd move us along and concentrated on staying upright until we reached the other side. 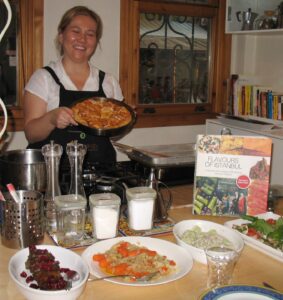 Özge, our cooking instructor, with several of the dishes we made.

Yesterday’s main adventure was going to a cooking class. Our teacher was a food historian who teaches at the university. She’s co-authored a book on Turkish cuisine of the 19th century. She and her co-author have a cooking school. She seemed genuinely shocked when Kathy and I confessed to our lack of cooking expertise. But bravely she set us to chopping and stirring.

The three of us managed to produce six authentic Turkish dishes, based on recipes that Ozge has translated (and modernized) from old Arabic script  from the 19th century. They were wonderful! I can’t wait to try these at home…and hopefully can reproduce them even without Ozge at my elbow.

But that has to wait. Tomorrow Kathy and I head to Cappadocia.

P.S. One accomplishment I have to mention – I have now learned to be woken up by the dawn call to prayer (though their calculaltion for dawn is interesting because it’s always still pitch dark), then turn over and go back to sleep. Is this how millions of Istanbul-ites also react? Or do they not even hear it any more?