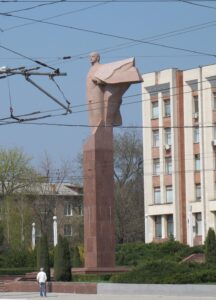 I made a trip back in time to Soviet Russia yesterday. And I did it without leaving the country of Moldova. Well, sort of. I actually did cross a border into Transdniestr, an area of Moldova that considers itself a country even though no one else does. The Moldovans humor them in this fiction to maintain the peace.

We crossed the “border” on the main road between Chisinau (capital of Moldova) and Tiraspol (capital of Transdniestr). First we wound our way through some barriers guarded by an “international peacekeeping force” (primarily from Russia), then pulled up to the actual Trandniestrian border guards. It was a fairly routine process, but tedious – filling out forms, getting out of our car to present ourselves to the customs guy inside at the computer, standing in line, having Boris (our driver) get shouted at by another woman in line, having the customs guy scrutinize our American passports.

I suppose it could have been worse, but I’ve had an easier time getting into Great Britain (known for their diligent security) than we had getting into Trandniestr…and really, why does Transdniestr feel it needs to be so protective?

It had to be especially irritating for all the Moldovans crossing the border to visit Granny. The weekend after Easter is an important holiday here (“Easter for the dead”) and there were a lot of people trying to cross the border to get to their home villages. They had to wait through the same tedious process we did.

We arrived in Tiraspol on a special day. They were celebrating the 66th anniversary of Trandniestr being liberated from the Nazis in 1944. The main boulevard (huge and wide) through the city was blocked off for the festivities. Except…the festivities appeared to consist of nothing more than a foot race. And in the several hours we were there, not more than about 20 people actually ran down that street participating in the race. 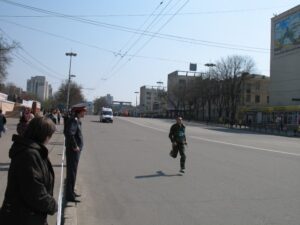 The main boulevard, completely blocked off for the festivities (represented by the lone runner here).

The wide boulevard was virtually empty (except for an occasional racer). A handful of people surrounded the trophy table in the middle of the street and there was a TV news crew filming. And there were a few people scattered along the barricades to watch the race.

But the police were out in full force, protecting the roped-off area, sternly gesturing to those walking by to stay off the sidewalk. There was a big enough force to protect against a WTO riot crowd, yet they were only protecting the empty boulevard from Saturday strollers, and not many of those.

Overhead, the loudspeakers along the boulevard blasted martial and polka music. These were old Soviet Russia favorites, our guide Tania explained. Periodically  a voice would blast out over the loudspeakers. They were probably just announcing something about the race, but with the overwhelming loud music, the barking voice, and the stern police lined up along the boulevard, I had the feeling I’d gone back in time to a rally in Soviet Russia and they must be shouting things like “Protect Mother Russia from the capitalists!”

Other than this non-attended Soviet rally, Tiraspol didn’t feel that much different from Chisinau. The open air market was the same, though smaller; Andy’s Pizza (Moldovan chain restaurant) was there on the main boulevard. Tiraspol sits on the banks of the Dniestr River and there was a nice walkway along the river banks, similar to Chisinau’s many parks.

But Trandniestr has its own money – the ruble, rather than the Moldovan lei. All the signs are in the Cyrillic alphabet, rather than a combination of Latin and Cyrillic, which is common in Chisinau. Transdniestr also has their own stamps, though you can only mail letters within Trandniestr with them.

Transdniestr even issues its own passports to its citizens. (Though they have to get a Moldovan passport if they actually want to leave the country since no nation in the world recognizes Transdniestr. They’re only recognized by South Ossetia and another breakaway republic whose name escapes me at the moment.) It seems like they’ve made life very complicated for themselves. 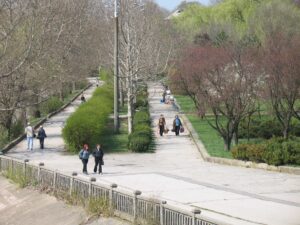 There are lots of statues of famous people throughout the city. These are mostly Russians since Transdniestr identifies with Russia and doesn’t have that many famous people of its own. The most startling is the enormous statue of Lenin in front of the Parliament building. I kept thinking about how nice that could look in Fremont.

The city seems like an odd throwback to Soviet times. Yet, the people apparently voted in this government and way of life on their own. There haven’t been accusations here of fraudulent elections (whether that means no one thinks they are fraudulent or just don’t feel they can speak up, I don’t know) as there were in Chisinau last year.

Leaving Transdniestr was a breeze. A few border formalities with the Transdniestr border patrol, but the Moldovan officials just waved us through without making us stop. From their point of view, we’ve just been traveling around within Moldova. The border is pointless.

5 Responses to “Flashback to Soviet Russia”