Like toothpaste being squeezed from a tube, I slithered sideways through the jam-packed aisle of the Moldovan maxi-taxi, a common form of public transportation in Chisinau. Built for 15, this one was carrying 27 people plus the driver, so it was pretty much breathing room only. 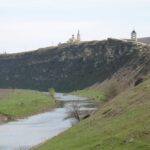 Church and monastery of Orheiul Vechi, overlooking the Raut River

Taking public transportation to see Orheiul Vechi was turning out to be more of an adventure than I’d thought. Normally we’d have taken one of the reasonably spacious trolleybuses that roamed the streets of Chisinau. But this was April 7 and the trolleybuses didn’t seem to be running. Tania (my guide) led me on a hike to Chisinau’s Central Market where a herd of maxi-taxis were parked in random groupings; people squeezing past them and each other. The white vans seemed to pull out at haphazard intervals, narrowly missing the people and other vans.

Tania got us aboard one headed to Orheiul Vechi. We started out standing near the front, but as each new passenger boarded we were pushed farther and farther toward the back. Apparently there’s no maximum passenger limit as long as you’re able to squeeze on. I was wedged in so tightly that even when my legs started to tire from bracing myself against the motion of the van, there was no real danger of falling. I simply bounced between the young man on one side of me and the leg of the really large woman who was seated, but whose body overflowed into the aisle. The man ignored my jostling to focus on his flirtation with Tania; the woman glared at me every time I swayed against her knee.

The sun beat in the windows and even in my t-shirt, I was sweating. Yet the locals, who were mostly wearing sweaters, never showed a bead of sweat as they sat stolidly in their seats.

The stifling heat and number of bodies made me long for a bit of fresh air, but the Moldovans seem to have an aversion to the stuff. The driver’s window was barely cracked open and one of the passengers had slammed shut the rooftop vent he was standing under. I guess he thought it was too breezy, but that seemed unlikely in the still, carbon-monoxide-laden air. I would happily have traded places with him and dared the breeze from the roof vent, but the impossibility of moving through the aisle defeated me.

When we got to our stop and I finally oozed my way forward to pop out of the van, I immediately gulped in fresh air. From the place in the road where the maxi-taxi had dropped us, we walked up a hill and under a bridge. I thought maybe we were walking to Orheiul Vechi now, but no, our destination was a taxi stand by the road in the middle of not much.

The next leg of our public transportation journey was to see if one of the locals was hanging out there at the moment, hoping to provide taxi service for a little extra cash. Since there seemed to be no Plan B and walking to Orheiul Vechi (3 miles? 5?) wasn’t appealing, I was glad to see the beat-up, gray Lada waiting there—our impromptu taxi to the monastery. 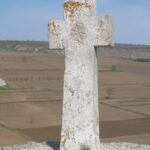 Lonely Planet describes Orheiul Vechi as fantastic, haunting, and chimerical. And it’s certainly a scenic place with a long history. There’s a monastery carved into a cave with a stern local monk who still lives there, a beautiful Orthodox church on the cliff overlooking the meandering Raut River and rich farmland. Tania explained all of this with the thoroughness you’d expect of a good tour guide.

But in the end, my most interesting memory of that day is not Orheiul Vechi, but the adventure of using every-day public transportation to get there by maxi-taxi and Lada. Lonely Planet describes this route as an “ordeal,” but I wouldn’t have missed it because  it allowed me a first-hand view of daily life in Moldova. Sometimes the experience of a traveler’s journey is better than the actual destination.

One Response to “Breathing Room Only”