In Greece, guard rails must be for sissies. There were certainly none on this winding mountain road across the Peloponnese. And I wasn’t too confident about the brakes on my rented, somewhat battered, Nissan Sunny since the car teetered on the edge of a skid on every wet curve in the road. 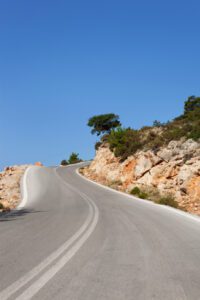 It was the most direct route from Mikinai to Olympia and had looked reasonably straight on my map. I’d rejected the idea of taking the four-lane highway, both because it looked so much longer and because that seemed like the “tourist” thing to do. After all, I’d been a Greek resident for three entire months. But after several hours of concentrated driving on this road, I was realizing Greek road maps weren’t to be trusted.

I hadn’t expected how isolated this road would be. I’d passed very few cars and the towns shown on the map consisted of just one or two white-washed houses clinging to the rocky mountainside. Nor had I expected the change in weather. The intensely hot blue August sky had been replaced by the ominous grays of a passing storm with fits of driving rain.

When the road wound off the mountainside and into a wooded area, I hoped I was getting back into civilization. Sure enough—as I came around a curve, I saw several cars…and a police officer motioning for me to pull over.

I’d once been pulled over by the Athens traffic police for no apparent reason. They’d asked me questions I didn’t understand, examined my license and my papers for the car, then waved me on, apparently satisfied even though I’d answered each of their questions with “I don’t speak Greek. Did I do something wrong?”

Now I had little choice but to stop, even though I assumed this would be another bout of meaningless law enforcement. At least since my last encounter, I’d improved my Greek language skills. This time, as the officer spoke rapid, incomprehensible words at me, I was able to say in careful Greek “I don’t understand. Do you speak English?”

He looked startled (either because no tourist had been stupid enough to take this road before or because no tourist would drive a car as dilapidated as the Sunny), but in equally careful English he explained there had been an accident, someone was hurt, and he wanted me to take the injured man to the hospital. Just past him, I saw a car as nondescript as mine at an odd angle half-off the road.

In the States I would have thought this request strange. (What about 911? What about police dispatch? What about liability issues?) But I’d learned that questioning things in Greece rarely resulted in better understanding since the most common answer to any question was an indecipherable Greek “hmph” accompanied by a shrug.

So I didn’t question this impromptu ambulance service. I didn’t consciously think about playing the role of Good Samaritan. I’d barely nodded my okay when my car was filled with a distraught Greek family of four, bringing with them the smell of drenched clothing and the mud that was streaked on their legs. With their casual t-shirts and flip flops, they looked like they’d been headed home from the beach.

“Go, go” the officer urged loudly, “To hospital in Pyrgos.”

“Where’s the hospital?” I shouted as the downpour increased in intensity, pounding on my windshield. “Where’s Pyrgos?”

Had that been on my map? Would there be a road sign? Although I’d found Greek road signs were often not all that helpful in allowing you to actually find your destination.

The officer looked alarmed, but insisted, “Go, go, we will help you.”

So we set off down the mountain. A fleeting thought – how could the police help me find Pyrgos when they weren’t in the car with me? But I accepted this, too, and just drove as fast as I could without causing another accident. 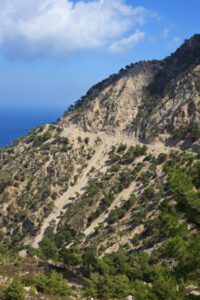 Down the Mountain to Pyrgos

The injured man, his leg carefully stretched out the length of the back seat, moaned with pain every time the car went over a bump. His wife and two children had piled into the front seat with me. With every moan, the pre-teen son who was half hanging into the back seat would pat my arm and motion with his hands “slow slow.” I wasn’t purposely being cruel, but one of the Sunny’s faults was an appalling lack of suspension. If I drove slow enough not to jostle anyone, we’d slow to a standstill.

The wife, crunched up against the door by her son, appeared to be yelling at her husband – berating him for the accident? Or maybe she was trying to comfort him? It’s hard to tell with Greek. It can be a very excitable, emotional-looking language with lots of hand gestures.

I desperately reviewed the Greek words I’d learned to see if any might be useful. My vocabulary of daily office pleasantries (Good Morning, Kostas), typical daily task phrases (unleaded, please), and basic questions (I am lost, where is the road to Delphi?) didn’t fit this situation. And Greek menu and parking terms, which I was the most fluent with, were clearly out of the question. Since I couldn’t say anything to comfort the little girl, who was crying, I just tried to smile encouragingly at her.

She began crying even harder at my smile and jostled the gear shift into Neutral as she squirmed since she was sitting partly on the center console. The injured man moaned as I jerked the car back into Drive. The son motioned “slow slow.” The wife kept up her barrage. The little girl squirmed again and I grabbed for the gear shift to keep it in Drive.

The car windows began to steam up and I was losing sight of the road. I opened my window hoping to clear the steam and got a lapful of water as the warm rain cascaded in.

The Greek Police Come to the Rescue

Miles later, another set of police officers motioned to me to pull over. I thought I might be off duty as an ambulance, but one of the officers simply jumped into the back seat (causing another moan from our victim). In halting English (right, left, straight), this officer guided me to the turnoff for Pyrgos and through its narrow streets.

Despite the chaotic urgency of the drive, the lingering smell of smoke in the Sunny from the policeman’s cigarette, and the realization I’d driven an hour out of my way and now had no idea how to find the road out of Pyrgos and back to Olympia, this detour had been a personal turning point.

I had my own flat, commuted to work each day, and paid my electric bill like any other resident of Athens. But as a blonde American who didn’t speak the language, I’d continued to be an outsider. I’d had an expatriate cocoon around me – living in an upscale suburb, shopping at an upscale grocery store, going to an English-speaking church. I’d been living like a tourist with a house key.

After being involved, even briefly, in the lives of this one Greek family, I now felt a sense of connection with daily life in Greece in a way I hadn’t before.

I looked at the road sign that had two arrows pointing in opposite directions, both indicating the road to Olympia. Muttering “hmph” as I shrugged, I chose my direction and turned.

5 Responses to “On the Road to Olympia”