As a child, we always tried to find a way to sneak up to this bell tower. Alas, it was always locked.

I went to a funeral last week and met my childhood.

The funeral celebrated the 94 years of life of my friend Sharon’s father. It was held in the church where I grew up, in the neighborhood where I grew up.

But bits and pieces of the old Ballard are still there. The drive to the church took me down streets that retained old Ballard’s Scandinavian flavor, before trendiness set in. The Ballard where almost every store or restaurant had a name like Olaf’s or Viking Something. The Ballard that was shut down by 6 p.m. each night.

I had the eerie feeling of traveling back in time when I turned onto the small street in front of the church and searched for a place to park, retracing the route my dad used to take every Sunday. It was a little surreal to walk through the front doors of the church and realize that the friends I greeted are now the same age my parents were when they brought me to this church as a child. A little nostalgic to remember trying to sneak up to the church’s bell tower during Sunday school, or running up and down the aisles of the sanctuary after Wednesday night choir practices while waiting for my dad to get out of his Session meeting, or my group of friends stopping at the neighborhood grocery to buy candy to fortify us for the 10-block walk home after church.

Coming here for such a different stage of life—a funeral—made it feel strange to remember that Sharon and I met here as kids in Sunday school. (Although we didn’t become friends until later when we were both in high school band. She told me she used to think I was one of those stuck-up kids from the “other” junior high school. I guess after 30+ years of friendship, I’ve convinced her I’m not.)

Strange to remember another season of life sharing in Sharon’s wedding day in this church as a bridesmaid wearing an apricot, lacy dress. 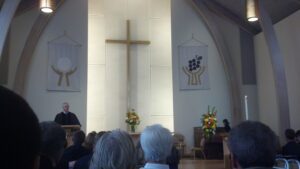 But the thing that made me most aware of time passing was the church’s new pastor. Although I’d stopped going to this church in my teens, my mom had been a member until the day she died at age 87, a few years ago. The pastor that she’d always told me about, who had visited her in her final days in the hospital, and had held her funeral service, was gone. The last pastor to know our family’s decades-long participation in the life of the church was gone.

I’ve visited all those ancestral places searching for some bit of evidence of my family’s existence. I know they were there. I know they laughed and cried and had children and had arguments and fell in love and died in those places even if no trace remains.

And now, the church in which I’d grown up had become one of those places where my family had roots, but had disappeared and moved on. A part of my childhood has already become history.