You may have seen the Ancestry ad where a man trades in his lederhosen for a kilt after taking a DNA test that shows he is more Irish than German.

A word of warning—if you make your wardrobe choices based on a DNA test, you may want to make sure that store takes returns. And if you plan your travel to ancestral lands that way, well, let’s just say that you should buy a refundable airline ticket. DNA ethnicity estimates are just that—estimates.

But “DNA is science,” you might argue. “It has to be right.” It’s true that the actual DNA is a biological certainty, and there are ways that DNA can be used for genealogy that are scientifically accurate. But ethnicity estimates are in the educated guess category.

As a genealogy nerd, I’ve tested with or uploaded my results to six different DNA testing firms or tools. Just for fun, I’ve been dabbling with comparing these six ethnicity estimates to my actual heritage, which I can document as 100 percent ethnic German to all 32 of my 3X great-grandparents (which takes me into the 1700s), to the 28 of 64 4X great-grandparents that I’ve identified, and to my 6X great-grandparents (about 1600s) on several lines. 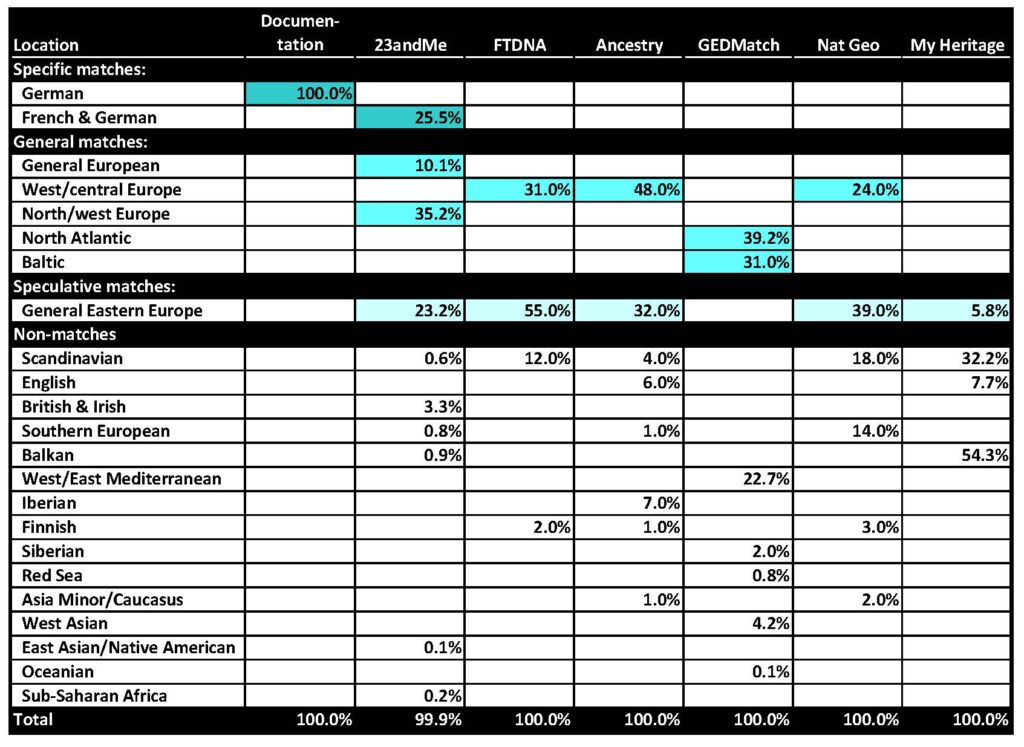 Out of all these tests, only one (23andme) identified a chunk of my DNA as specifically German (or at least, German/French). Most of the tests DO correctly (but vaguely) identify large chunks of my DNA as European (north, west, central). I also think the North Atlantic and Baltic categories that GEDmatch uses make sense, as I’m fairly certain a number of my lines started out in the northeastern part of Germany that borders or is now Poland.

The numbers that look stranger to me are the high percentages in Eastern Europe and the Balkans. My peeps lived in these regions, but came from Germany and intermarried with other Germans. When I first saw these large amounts, I suspected an NPE (non-paternal event, aka a biological father that doesn’t match the documented German father I have in my records). But as I learn more, I think this is just as likely (probably more likely) to be a symptom of the estimating process than an illicit affair by one of my ancestresses.

As far as I know, I’m not a reference population person. But if I were, I have many generations of ancestors born in Poland and Ukraine. Anyone in the reference population who looks like me would indeed appear to be Eastern European, despite the original German roots, which influences how the results for others is predicted.

You also have to look at each testing company’s definition of their geographic areas. Ancestry shows me as 6 percent British, but their definition of Great Britain includes part of the European mainland, right around France/Netherlands/Germany where my ancestors could have been roaming around.

My specific heritage also highlights the issue of migrations, and how difficult it is to pinpoint where a person came from, especially within a geographically contiguous area like Europe. (And don’t fool yourself, despite the lack of cars/trains/planes, our ancestors wandered around a lot—just more slowly.)

My heritage is German, despite the generations my family spent in Ukraine, Poland, and Hungary. And although I consider myself German, I have no idea where my family members were in the 1200s. Maybe they were in Great Britain getting ready to migrate to Germany, or part of Genghis Khan’s raiding parties heading west toward Germany. Prior to the 1600s, my ancestors might well have been somewhere other than Germany.

How to use DNA to sort this out

Bottom line—the ethnicity estimates are a lot of fun. They’re a great first step into exploring your genetic genealogy. But don’t expect this to provide significant clues to your family history.

Where DNA is helpful is by using it to identify distant cousins with whom you share DNA, and comparing your documented family history to theirs to find out new clues about your ancestors. You may discover some 3X great-grandparents that you can’t find documentation on, but your distant cousin has. You may discover that branches of your family wandered places that you never knew about. (I suspect some branches of my family ended up in Siberia or Kazakhstan, and I don’t have documentation on that.)

Best way to get started is: 1) Take a DNA test, 2) Load it to GEDmatch, 3) Buy Blaine Bettinger’s book, “The Family Tree to DNA Testing and Genetic Genealogy.” (I took a DNA workshop from Blaine once. He is awesome in his knowledge, which is the reason for the free advertising here.) GEDmatch has tons of free tools to analyze your DNA, and Blaine’s book will tell you how to make use of those tools most effectively.

Then—go forth and use real science to uncover the power of DNA.

Since I wrote this original blog post, both 23andme and Ancestry have updated their ethnicity algorithms to make them more accurate, so I reviewed my results to see how much they’d changed.

My 23andme estimate didn’t change at all, but my Ancestry estimate changed quite a lot. They are the testing company that is now most accurate, showing me as 60 percent German (versus my 100 percent German heritage documented).

Although the details change, my message stays the same: ethnicity estimates are fun, but are still just estimates. 4 Responses to “Dabbling in DNA”