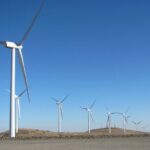 Whooping sounds and high fives were Tyler and Adam’s response when I told them I’d seen the sign on I-90 for Wild Horse Wind and Solar Facility. You gotta love people who love their jobs this much. As recent graduates of Central Washington University’s Recreation & Tourism Department, I got the impression the signs were their idea.

Without them, I don’t know how anyone would find this place. “Off the beaten path” pretty much describes the Wild Horse visitor center on Whiskey Dick Mountain. I’d followed the bread-crumb-like trail of blue signs, some just peeking between the trees, through the town of Kittitas and onto this road up the sagebrush-covered mountain. The maintenance building and business-like Puget Sound Energy trucks didn’t inspire confidence that a random tourist would be welcome, but I decided to trust the bright red “Open” sign and turn up that final gravel road. 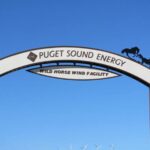 This road wound its way around the bases of the wind turbines as it climbed the ridge. The visitor center was perched at the very top with several other cars in the parking lot, proving a few other inquiring minds had found their way here, too.

In every direction, the simple white columns of the wind turbines fanned out in rows along the ridges. Some were still, some were turning lazily in the light breeze. I know that some detractors say they’re ugly or ruin the landscape. But ever since I first saw these in northern Germany, I’ve thought they were rather majestic and elegant. And they’re a lot more attractive way to generate power than all that oil sloshing around the Gulf of Mexico. 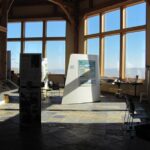 Though small, the visitor center had lots of great information:  a video showing how engineers climb up ladders inside the towers to do maintenance, a glimpse of the software control panel provided by the turbine manufacturer Vestas to manage the wind farm, and maps showing how wind speeds are measured so wind farms can be strategically located. As I looked at one exhibit, Adam came over to explain how the turbines automatically adjusted the direction and pitch of the blades to make the most of the available wind.

It was fun to find out more about these wind monsters I’ve admired. It was fun to find something new along the familiar road between Seattle and Spokane. But most fun of all was talking with Adam and Tyler with their enthusiasm for “their” wind farm and how to share that information. (They loved it when I asked if the wind farm is on Facebook. It is.)

And I liked their direct answers to my questions. Like when I asked why it was named Wild Horse.

“Well, we’re on Whiskey Dick Mountain, so that would have been another name to use. But c’mon, there are all sorts of public relation problems with that!” 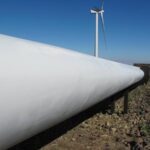