I never thought I’d compare Spokane with Paris. But on a recent visit I found one similarity so compelling I just couldn’t help myself. The similarity? I can tell you in one word. Well, actually two.

It was everywhere on the bluff overlooking the Spokane River near my friends’ house. It was prominent on Fish Creek Trail where we went bike riding the next day. Don’t people in Spokane clean up after their dogs?

I mean, at least in Paris, they have some excuse. They all seem to take their dogs everywhere—shopping, into restaurants. I suppose it would be a little disgusting to reach into your purse in the Yves St. Laurent store to pay $900 for a pair of grey leopard calfskin pumps and pull out a bag of dog poop instead of your wallet. Or to have little Gigi walk into an upscale multi-Michelin-star-rated restaurant with a bag of poop swinging from her collar.

But really, what’s the excuse in Spokane? Shoot, we didn’t even see that many actual dogs, just their remnants. Would it have been that hard for their owners to have carried a bag back to the beginning of the trail and used the city-provided trash cans? 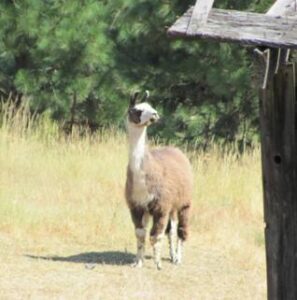 Of course, maybe we could blame the llamas. They were hanging out near the trail, too. And I wouldn’t expect them to pick up after themselves.

2 Responses to “What’s the Scoop on the Poop?”