When you can’t count on rain in Seattle, what can you count on?

Rain seemed to be a necessary ingredient for visiting a rain drum exhibit, so we chose a day when the forecast was for rain. All day long—9 a.m., noon, 3 p.m.

But as we headed east from Seattle on I-90, the sky was disappointingly sunny. We watched anxiously, hoping the clouds were moving in. A sprinkle of drops on the windshield gave us hope. But we arrived at the Cedar River Watershed Education Center under depressingly clear skies. 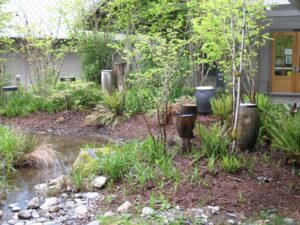 Fortunately, the Rain Drum Courtyard is prepared for even a clear day in the Pacific Northwest. In fact, actual rain would interfere with the orchestrated drum routines  created by inconspicuous pipes sprinkling water on the drumheads. Four drum pieces alternate (including Native American, Balinese, and Cuban rhythms) with the occasional croaking frog adding an improvisational note.

It’s a serene place on a midweek spring day. So serene that the docent told us of a woman who once stayed there for hours, lying on a bench, listening to the music of the drums, and de-stressing after an argument with her husband over cleaning the garage!

The exhibit area of the Education Center describes the water cycle in the environment and how water is managed for the region. I flunked as a water manager—I was too quick to release water from the reservoirs anticipating a big storm and flooding. Alas, in the simulation, the storm never came and I was responsible for summer water shortages for the entire city of Seattle. I guess this won’t be an alternate career choice for me.

The exhibits may be set up more for the children’s school groups that visit, but my friend Jackie and I had a lot of fun watching our “water drops” (a cross between a nerf ball and a ping pong ball) get sucked into a tube and circulated around the “environment” (actually a series of clear tubes that take the water drops to the “ocean” or turn them into “snow”). I guess we’re just kids at heart…or too easily amused. 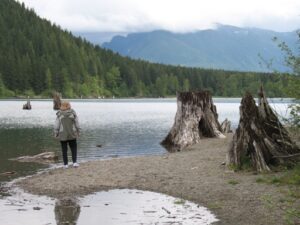 Below the Education Center, there’s a path alongside Rattlesnake Lake. It’s a beautiful and peaceful mountain lake. You’d never guess that remnants of the town of Moncton lie below the surface. In 1915, when a dam was built on the Cedar River, this railroad company town unintentionally became a Pacific Northwest Venice. At least until the water got too high and the buildings started floating away. Display boards along the path show photos and tell the history—and of the destruction—of this small town.

I’d heard of the Cedar River Watershed with every news report about floods or water shortages in the area, but never really knew where it was. I’d driven past this highway exit numerous times over the years, always on the way to somewhere else, never taking the exit to find out what was there.

Magical rain drums and an old ghost town—it’s amazing the things that are in my own backyard that I never knew about!