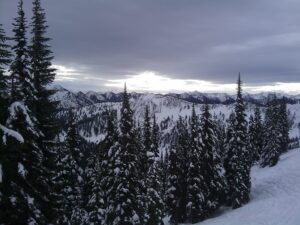 A view from above the Aquarius run.

I’ve sometimes wondered what it would be like to ride a luge, lying on your back, careening downhill at the mercy of the icy track beneath you with little control of your direction or speed. Of course, I’ve never wondered enough to actually try it. I’ve been very happy just watching the Olympics and wondering about it.

But now I’ve gotten a glimpse of the lugers’ world. Okay, I was actually in a toboggan, not a luge. And I wasn’t careening down an icy track. But I was flat on my back. And we were careening down the ski slope. (Though I doubt it felt like careening speed to Mario.) And I was out of control. (Though I’m confident that Mario was in control.)

But when your only view is of the sky, the tree tops, and the back of a ski patrol jacket, you have a slanted view of the situation. Slanted and slushy, with the corn snow spraying up off the back of Mario’s skis and into my face. (Fortunately he’d warned me to wear my goggles.) Looking up at the underside of the rope tow is another view of reality I’d never expected to have.

(Before I explain the actual incident, it’s important to know that I’d discovered the musical Mamma Mia! the weekend before. I saw the movie twice in 24 hours and had had Abba music going through my head ever since.)

It started out as a perfect ski run. The skies were gray, but clear; the mountains sharply outlined against the sky. I was cruising down a familiar slope, my turns in perfect, unbroken rhythm to the song in my head (maybe you’ve guessed it?), “Dancing Queen.” I was flying, enjoying…and then I realized I was on the ground sliding. And sliding. And sliding.

After I was reunited with my skis and poles, I first thought I could ski out of there under my own power. I did make it to the bottom of the lift on the back side of the mountain, up that lift, and partway down the front side. Then an attack of good judgment hit me (related to the steepness of that slope and the length of the run ahead of me). Marcia went for help. 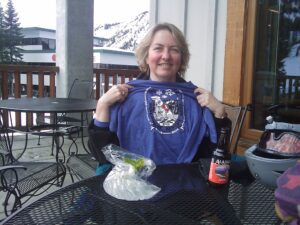 As long as I was being rescued, it only seemed right to support the ski patrol’s avalanche rescue dogs. And it’s a cute t-shirt.

The Mario Express (aka the Stevens Pass Ski Patrol) arrived to cheerfully wrap me up and pull me down the mountain. I discovered I was thankful my attack of good judgment had waited until I’d transported myself off the backside of the mountain. Otherwise, I would have had the dubious delight of being strapped in a toboggan and hoisted onto a rack on the chairlift. I’m sure they have a way to keep the toboggan from falling off the chairlift, but the Mario Express was definitely a better way to go. Sort of like flying British Air vs. Aeroflot.

Here’s the official report of the incident, quoted directly from the ski patrol form:

“‘I was singing Dancing Queen and I caught a ski in the snow, went face forward and landed in the snow. Then slid for awhile, strewing my equipment on the run.’”

Love Mario’s sense of humor in quoting me directly! I also loved his prescription for a cure—chardonnay. I’m never good at following directions, so I went with Alaskan Amber Ale instead.

2 Responses to “Planes, Trains, and Toboggans”