My goal in 2017 is to visit every eating/drinking establishment in my neighborhood of Fremont, Seattle, updating my 2014 reviews. Here are my reviews for the Asian restaurants I visited. See more reviews. 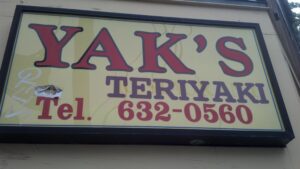 **** (2017) Yak’s Teriyaki  It’s such a hole-in-the-wall, with banged-up-looking tables and chairs, and the service is a bit abrupt. Not somewhere you really would go for a cozy meal. But I just love their teriyaki—tasty, generous portions. I just keep coming back over and over. (Downtown Fremont)

(2014 review) This place has been on the corner of 35th and Fremont as long as I can remember. And as long as I can remember, it’s had a very uninspiring exterior. But yum—I had a spicy chicken teriyaki that was fabulous (and enough for two meals). And it’s actually big enough to have a few tables inside (which means that you don’t have to sit on a street corner to eat it—another mistaken impression of mine).

*** (2017) I Love Teriyaki  I am so sorry I was unenthused about this place last time. I dragged my feet getting there this year, but headed down one day when I was working from home, just to get my visit over with. The place was packed and my spicy chicken teriyaki was tasty and plentiful. They looked at me funny when I asked for a to-go box and then sat down there to eat. But their portions are generous. In fact, that made three meals for me. It’s a gem. I’ll be back! (34th Street) 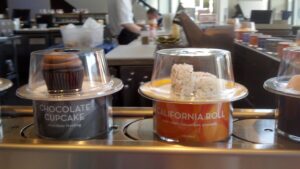 (2014 review) I’d avoided this place because the stark white decor, and the food whizzing by on a conveyor belt struck me as a sterile, Jetson-like, space-age dining experience. But I found that the sushi was surprisingly good. I actually liked the little label on each sushi that whizzed by that included the name and ingredients, making it easy to choose what I wanted. I’m still a bit discomforted to see chocolate cupcakes whiz by though, since they aren’t a usual sushi-type side dish.

*** (2017) Chiso  I’m lucky to have two great sushi options so close to me. Nicer atmosphere than Blue C and nicer presentation. I’ve sat at the bar the last few times I’ve been there, and it’s always sort of fun to see the sushi in process. (Downtown Fremont) * (2017) Lucky’s Pho  Since I’m not a big fan of pho, I went for the kogi tacos. Although I haven’t been back since my 2014 visit here, I had fond memories of the Korean barbecue beef. But this time it left me underwhelmed. In taco format, the scraps of meat were lost in a sea of lettuce. I was looking for a slightly higher meat to garnish ratio. Maybe the pho is better as there were a respectable number of people lunching there for a Saturday. (Downtown Fremont)

(2014 review) Because of my lack of enthusiasm for pho, I was delighted that they also had alternatives. My Korean barbeque was pretty tasty, but my friend’s vermicelli bowl was lukewarm. If I want pho, I’d rather go to Pho Tran Brothers. If I want any other type of Asian, there are lots of alternatives. But if I ever do start to have a craving for Korean barbeque (which hasn’t happened in the last 50 years, but you never know), I would certainly come back here.

*** (2014) Revel  I was a bit hesitant about their supposed Korean-based menu (I’m picky about my Asian foods), but as one friend said, “They have lots of luscious, barbequed meats—what’s not to like?” The food was certainly Asian-influenced, but I didn’t detect an over-abundance of kimchee. Instead, I had a teriyaki salmon salad and some yummy thing they did with pork belly. And there’s always a smoky barbeque smell in the air that keeps drawing me in. (Downtown Fremont)

** (2014) Pho Tran Brothers  I’m not a big pho fan (it just seems like hard-to-eat noodle soup—I don’t get the attraction). But as noodle soup goes, this is the best option around. And how can you not love the miniature French-style cream puff for dessert? (Downtown Fremont)

CLOSED (** in 2014) Fremont 1 AM  I’ve rarely seen anyone eating in this place and yet it stays open. This makes me wonder if it’s actually being used for money laundering rather than being a real restaurant. However, they had a menu and the meal I had (though I’ve forgotten what I ate) was pretty tasty. It creeps me out to go someplace no one else seems to go, so it’s not high on my list. But I would go back if I had to. (Downtown Fremont)

CLOSED (** in 2014) Udon Noodle  I’m not a big Udon noodle fan, but was pleasantly surprised to find they also have some Thai food on their menu. The Thai pork noodle dish I had was great. It’s a takeaway place in a location I’m unlikely want to grab takeaway food, but I wouldn’t hesitate to stop if I was hungry and driving by. (Stone Way)