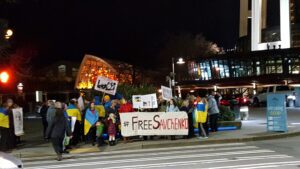 I am an idiot. In the space of about 18 hours, I participated in two demonstrations (one in pouring rain), tweeted about both, participated in a Twitter storm (an online protest), wrote emails to my senators and congressional representative, and prayed for Nadiya Savchenko.

Nadiya is a woman to admire—a pilot who was the first woman to graduate from Ukraine’s military flight school and served with peacekeeping forces in Iraq, an elected member of Ukraine’s parliament, and a delegate to the European Parliamentary Assembly Council of Europe.

She is also a prisoner, held in Russia on trumped-up charges for nearly two years. In protest of their trial proceedings (which bear more resemblance to a Three Stooges movie than to justice), and the continually delayed but expected sentence of 23 years in a Russian prison, she recently started a dry hunger strike. No food, no water. It’s estimated that a person can live a week, or maybe eight to 10 days at the outside, without water.

Nadiya’s been without water for six days. So her release is a little urgent.

The urgency drives my actions. But I’m an idiot because, for all my frenzy of activity, I have no expectation that anything I do will make a difference. She has become a symbol of feisty Ukrainian resistance to Russian interference with and invasion of Ukraine. As such, Putin can never back down and let her go.

Possibly (though not likely), she’ll listen to the pleas from many to stop her hunger strike, and when the court reconvenes on March 21, she’ll be sentenced to 23 years in a Russian prison.

More likely, she’ll continue her strike and she will be dead on March 21. Whatever sentence Russia gives at that point will make no difference. (I can even see a horrific scenario in which the court makes the perverse announcement that they never intended to sentence her to prison at all. I wouldn’t believe them, but I can see them delighting in torturing her family.) 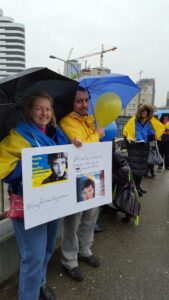 Demonstrating for Nadiya in the Seattle rain

All of my protesting and tweeting and letter writing is based on the assumption that Russia cares what the world thinks of them, and therefore, will release her. But I know that Russia doesn’t care. And since the international community hasn’t stopped them when they invaded Ukraine or propped up the despotic Assad regime in Syria, I doubt that international leaders’ calls for her release have any impact on their plans.

So why do I bother?

I met someone at the demonstration I went to today. He’s been in the U.S. for 20 years and says he feels more American than Ukrainian. And even growing up in Ukraine, his childhood and youth were during Soviet times, so he said he felt more Russian than Ukrainian. But, he said, this isn’t about politics. It’s about standing up for moral principles. I agree.

But also, in some unexplainable, illogical way—I have hope. I see no possible way for this to work out well for Nadiya. But I remember in the final days of Maidan, I felt the same. People were dying. Agreements were being struck that left the corrupt Yanukovych in place. I saw no good path forward … and then one appeared. Yanukovych fled, leaving the opening for a new government to be established. Even with all the current problems, Ukraine is better off than it was before Maidan.

I see no good path forward for Nadiya to be able to return to Ukraine a free woman. But Nadiya’s very name (in Ukrainian) is Hope.

Nothing I am doing will logically make a difference. But I choose to hope. And demonstrate. And tweet. And write emails. And pray. I may be an idiot, but I choose hope.