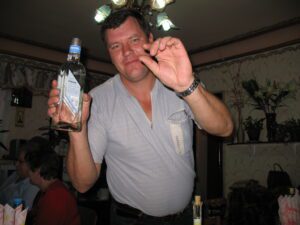 “Chut chut?” asked my generous host, Vova, as he gestured with the vodka bottle.

The first time I went to Ukraine, I hated vodka. That’s a problem, because it’s a mark of Ukrainian hospitality to share with guests. Generously. In a seemingly constant flow.

I’d pretend to drink it and hide the glass behind a bowl or something. I’d slide my glass over to a friend so he could drink my shots in addition to his. (Bleary-eyed the next morning, he told me I was on my own after one evening of that.)

By my second trip, I’d learned to beg for some orange juice (acting like I was just thirsty and it was unrelated to the vodka) and use the orange juice to wash down the vodka. I didn’t want to be rude, but I really couldn’t get the stuff down no matter how small my sips were, and my hosts would look at me with such disappointed eyes if I didn’t drink what they’d poured for me.

But it was unescapable. Ukrainians are the ultimate in generous hospitality, and culturally, their hospitality includes vodka. They are indefatigable in filling your glass. I quickly learned an important phrase: “чуть-чуть” (chut chut) or “just a little.” It didn’t stop the flow, but it slowed it down.

I’m not sure how the transition happened. (Though it might be related to the first time I had dill pickles with vodka. Who knew that was so tasty?) But one trip to Ukraine, I suddenly found myself drinking—and liking—the vodka shots my hosts were serving.

I knew I’d completely embraced the vodka tradition when I went to a dinner in Seattle where my friend served blinis and vodka as an appetizer. I finished my shot glass in two gulps (which would be slow by Ukrainian standards), looked around to see my friends all still sipping daintily at their shot glasses, and thought, “What’s up with that?”

Vodka will never be my drink of choice, but I’m glad I’ve learned to embrace the culture and not commit a social faux pas when visiting Ukraine.