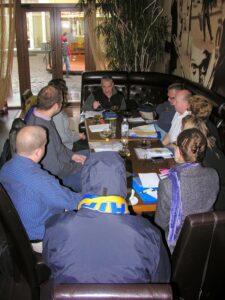 Our observer team divides up precincts and makes plans

My reason for being in Ukraine became abundantly clear in a rundown bar on a Sunday morning in Odessa.

I was serving as an international observer at Ukraine’s first parliamentary election after the Maidan Revolution had toppled the corrupt, Putin-puppet president eight months earlier. My observation partner, Kevin, and I had started the day early, watching one voting station open up and two more since then, validating the openness of the physical set-up and adherence to election procedures.

Our team leader had suggested that after every few polling places we visited, we should find a coffee shop and wifi so we could upload our observation results. No doubt that worked well for him in the heart of the city, but the precinct Kevin and I had drawn was on the outskirts, far distant from any cozy coffee shops with amenities like wifi.

The ‘burbs of Odessa

To be honest, I liked that better than being in the heart of the city. Although I’m an urban gal at heart and love the beauty of Odessa and Kyiv, my peeps (ancestors) in Ukraine had lived in small villages. Those small villages are where I’d grown to love Ukraine and Ukrainians. So when we scoped out polling stations on Saturday, the day before the election, it seemed natural to me to be walking down dirt roads and broken concrete pathways as we went from school to school hosting voting stations.

It just seemed quaint that, in our fruitless search for a coffee shop with wifi, all we could find was a small outdoor market, and that when we tried to find our way back to the main street, we had to weave our way past the Azerbaijani man carrying a side of beef over his shoulder. They didn’t look hungry, so….

It was a little bit less quaint when we had to walk past the pack of (wild?) dogs on the street. Kevin (who lived in Odessa and would presumably be aware that wild dogs on the street were a possibility) said, “Oh yeah, I meant to bring something in case this happened.” Clearly, I was the Girl Scout (always prepared) of our team. But, having come from Seattle where wild packs of dogs are not an everyday occurrence, I wasn’t prepared for this one. Fortunately, we were able to edge by them.

I was better prepared with basic sustenance (energy bars) because I didn’t think we were likely to find anywhere for lunch in such a rural setting. But on both the preparation day (Saturday) and the actual election day (Sunday), we encountered small neighborhood restaurants just when we needed them most. Mmm, hot borshch on a cold, fall day.

But from my whole election observation experience, three memories stay with me vividly, even today, almost exactly two years later.

We allowed ourselves to be locked into the voting station of our choice when the doors closed at 8 p.m. for the count. I watched the transparent ballot boxes turned upside down on a big table, creating an enormous pile of ballots to be counted before any of us could leave. I watched the local election committee members manually tear corners off unused ballots and bundle them up in now-useless candidate posters. That prepared them for official disposal that would prevent the ballot boxes from being stuffed with illegally marked ballots.

One of the local observers asked me, “Is your election process in the U.S. pretty much the same?” My mind flashed to computerized voting machines, voting by mail, and being able to verify online when my ballot is received and counted, but I answered simply, “Well, it’s a little different.”

I was there as an impartial observer and took that seriously. I was there to observe whether anyone in the room was nefarious enough to cheat during the ballot counting. But when you’re locked up in a room with these people for so many hours (I think we finalized the count about 2:30 or 3:00 a.m.), you can’t help but exchange friendly conversation with everyone locked in with you—the local election committee, other observers, and … well, not the Russian TV guy. No one got friendly with him.

But the best moment was explaining (as well as I could with my 10 words of Russian) that Odessa had a special place in my heart because my grandparents (my babushka and dadushka) had been born in the Odessa oblast. I immediately became a favorite, and one of the election committee members checked in with me to throughout the evening, patting my hand and rattling something at me in Russian that was clearly fondness, apparently uncaring that I couldn’t understand a word.

I belonged. It was nice.

We were on the outskirts of the city of Odessa, the far outskirts.

Another vivid memory is the angry Russian man. One of the polling places we scoped out the day before the election was a business office. It was hard to find the entrance and we were delighted when we found signs posted to help voters (and us) find it. We dutifully took photos to document this as a positive for this voting station.

It’s such a strange thing to be yelled at in a foreign language. There was nothing I can say to defuse the situation (because I didn’t know what he was angry about and he wouldn’t understand my words anyway). I just let him talk and didn’t worry until I heard the proud phrase “Я русский” (I am Russian) and then a reference to “titushky” (hired thugs who beat up pro-Ukrainians during the Maidan Revolution).

When you’re a foreigner monitoring an election that came about to a large extent because Ukrainians resisted Russia’s influence on their country, someone who is proud to be Russian and familiar with street violence is not someone you want to argue with. I looked at Kevin; he looked at me; both of us trying to decide what to do next.

At that moment, a Ukrainian woman came up, assessed the situation, and started scolding the man, waving her finger in his face. When clearly he was not going to give up and leave us alone, she smiled ruefully at us, grabbed him by the coat sleeve and dragged him off with her down the road.

Sunday morning in a rundown bar

But coming back to the rundown bar on election morning where we had the most memorable conversations of the day. It was a drab little place that mostly served alcohol though I managed to get a cup of coffee. No one there had ever thought to need wifi.

A drab little place with people who had nowhere better to be on that Sunday morning than in a bar, drinking. It seems an unlikely spot to be memorable. But the people in the bar showed me just what Ukraine was fighting for.

When we explained why we were there (we felt some explanation was necessary as I doubt another American had ever wandered into this place), the bartender broke into a big smile, and she said, “Thank you for what you are doing for Ukraine!” She talked enthusiastically about how Ukraine needed to change and the hope that Maidan had brought to the country.

One of the patrons of the bar was equally animated, but less optimistic. To make his Russian understandable, he illustrated what he was saying with his hands, making broad gestures to represent average people being crushed by the oligarchs in power. He talked bitterly of how nothing had changed, nothing would change. Me, Kevin, and a party observer during the long evening of counting ballots.

Hope for a brighter future.

Despair that any change was possible.

I realized right then, that’s why I was there—to contribute in some small way to banishing the despair and fanning the flame of hope.

Two years later, I could walk into that same bar and probably have the same conversation. Some people would have hope and recognize that some positive changes have happened. Some would feel despair at the glacial pace of the change, that the system is too broken to be fixed quickly or at all.

Ukraine has a long way to go. Hope and despair. Which will win out?