All paths or conversations in Istanbul seem to lead to Turkish carpets. Walking through the Sultanahmet area is an obstacle course of dodging charming Turkish carpet salesmen who try to engage you in conversation, then lead you to their carpet store.

“Where are you from?” is the most common opening gambit. Then they’d strike up a conversation about how they know someone there or had always wanted to visit. The answer “Seattle” seemed to stump them a bit until I added “Home of Microsoft and Starbucks.” The answer “Belfast” also stumped them – I guess they don’t get many tourists from Northern Ireland. 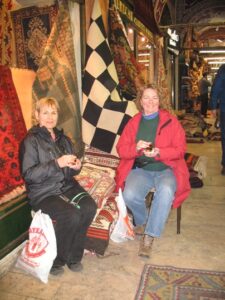 Drinking apple tea, waiting for the sales pitch to begin.

They appeared to believe me when I told them I was from Germany, even when I said it in English, telling me about their cousin or brother who had lived there. But as my friend Kathy reminded me, even if I told them I was from Mars they’d probably believe me. And then tell me how cold those Martian nights are and how surely I need more Turkish carpets to cover the floors.

Some carpet salesmen had a bit more imagination. One stopped us with “Do you know what today is?” He shared with us that it was his birthday, showed us his driver’s license to prove it, then told us we were in luck because he offered special discounts on carpets on his birthday. Of course, some people at our hotel had talked to the same guy on another day. He must have 365 different driver’s licenses. They wouldn’t even have to be especially good forgeries. What tourist would know what a valid Turkish driver’s license should look like?

Another line I liked was “Have you met Cleopatra?” and he gestured toward the white cat sleeping on a carpet. When we shook our heads and kept walking, he called out, “I could tell you all about how I will rip you off, but you’re not even stopping to talk with me.” Definitely a creative guy. I wonder how successful that line was for him.

Maybe the best yet was “You are coming here to see the Blue Mosque? Unfortunately, it is closed. But my shop is open.” At least he was direct and to the point.

Even asking for information isn’t safe. We asked someone where we could buy jetons for the tram. He smoothly slid the conversation from pointing out the store selling the small tokens to how we should spend our time waiting for the tram in his store looking at carpets.

After a couple days of this barrage of Turkish charm, you find yourself questioning every bit of information you’re given. When we asked for directions to the Spice Market, was that vendor telling us (by gesture and in rapid Turkish) to go around the corner and down that street? Or was he really saying “Buy some of my fresh apricots that I have displayed around the corner of this shop?”

Of course, for all the exasperating, overly pushy, overly charming salesmen, there are the genuinely nice Turkish men, too. Like the taxi driver who was concerned about dropping us off in a distant Istanbul neighborhood at a house covered in graffiti until he verified we really were at a legitimate cooking school. Or the juice vendor who, when Kathy asked the price to buy an orange without being juiced, simply tossed it to her and said “It is my gift to you.” And it was. No strings attached; no follow up pitch to come see his brother’s carpets. Hurrying tea from the central tea kitchen to one of the carpet stores.

But for the standard Turkish carpet salesman, almost nothing seems to dissuade them. They follow you, accuse you of breaking their hearts, tell you about Istanbul, offer you apple tea. We did let ourselves get sucked into negotiations in one store. Mehmet worked the desk at our hotel and had been very helpful with all our questions. We ran across his family store in the Grand Bazaar and couldn’t escape the offer of apple tea without seeming rude.

I don’t like negotiating much, but it’s easy to stand firm when you really don’t want the product. Mehmet’s cousin went from $1200 to $420 on the carpet I was looking at. No doubt it would have been a reasonable deal at that price…if I’d actually wanted it. It was easy to say repeatedly “I know it’s an insult to that beautiful carpet, but I couldn’t pay more than $300.”

Kathy had the most effective line to stop a sales pitch. When Mehmet’s cousin saw I wasn’t going to buy, he turned to Kathy. She shook her head. “I’m just in Istanbul for the dental floss and salad dressing. I live in Moldova and need to do grocery shopping here.” No doubt that was a line he’d never heard before.