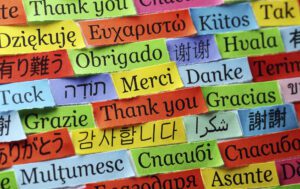 “I don’t speak the language,” seems to be the most often expressed fear people have about traveling to another country. But to me, that’s always seemed a very limiting way to look at travel. Most of us don’t speak more than one or two languages, so if you restrict yourself to countries where those languages are spoken, you’re missing out on a lot of the world.

Visiting a country where you’re a linguistic idiot may mean that you won’t be able to have a deep conversation with the locals about global politics, but that doesn’t mean you need to avoid these places. Here are a few simple ideas of how to get around.

Before you go, learn some key phrases. I think the most important phrase to learn is, “I don’t understand.” This was by far the phrase I used most often when I recently spent two weeks in Ukraine. My badly pronounced “Ya nay penyamayo,” invariably caused the person speaking to me to smile, but they walked away to find someone else who could help them.

It’s also good to learn some basic pleasantries: Hello, good-bye, excuse me, thank you, please. And a couple of key questions words, such as how much and where, are always useful. Don’t worry too much about language elegance. “Where metro?” is a bit abrupt, but it communicated my need just as effectively as “Can you help me find the nearest metro station?”—and it was a lot easier to learn and remember. 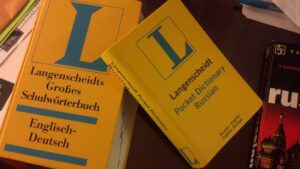 If you’re going somewhere that uses an alphabet that you don’t know, take a little time to learn how the letters sound. Even if you don’t understand the language itself, there’s great comfort in being able to sound out something on a menu and realize that десерт is dessert.

This is also helpful in reading street signs. I might still be driving around Greece lost if I hadn’t known that Δελφοί on the road signs was directing me to Delphi.

Don’t be shy; be willing to look a little silly and act out what you’re trying to say. The server in the restaurant or a new local friend may not understand, “Your cooking is just like my mom’s. That dinner was delicious!” But if you act out eating (hold imaginary fork and shovel food in your mouth), then give a big smile and say “Mmmm!” they’ll know what you’re trying to say. Or if you hold up three fingers in addition to saying in English, “I’d like three metro tokens,” you’re much more likely to get what you want with minimum confusion.

If you’re shy about charades, carry pencil and paper with you so you can draw a picture of what you mean or write out numbers (especially useful in asking the cost of something you want to buy). 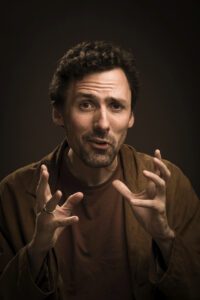 You may not understand every word (or any words), but watching the body language of someone speaking another language often helps you puzzle out the gist of what they’re saying. When I was in Ukraine as an international election observer, I only understood four words of what the angry Russian man said to me. But his body language (in my face, angry voice and arm movements) made it clear that he didn’t appreciate the interference of Americans and that I needed to move away from him.

5 Scope out difficult situations in advance

If you’re going to do something complex that requires decisions, try to gather information in advance about the options. You may be able to do this on the Internet or with English-speaking hotel staff or an English-speaking acquaintance. If you know in advance that when buying a train ticket you’ll be asked to decide on options like asiento reservado (reserved seat) or tren rápido (express train), your conversation with the ticket seller in the Madrid train station is more likely to go smoothly.

If you speak English (or Spanish or Mandarin Chinese), you’re in luck because these are the most commonly spoken languages in the world. So you’re likely to encounter someone in your travels who speaks your native language and can help you.

Of course, it’s likely that they won’t speak your native language as well as you do, and they may have trouble understanding what you’re saying. In those situations, speak more slowly, but not more loudly. Yelling something at a stranger in English will not improve their English skills. It will only make you sound annoying. Or imply that you think they’re deaf.

Speak slowly, enunciate, and use simple, commonly used words to make it easy for them to understand you.

7 Translate key phrases ahead of time

There may be situations where it’s important to communicate something complex more exactly. When I visited my ancestral towns in Poland, I needed to be able to communicate that my ancestors had come from that village, and that I was looking for the old German cemetery and church. This is difficult to act out no matter how good of an actress you are.

For this situation, I wrote out my questions ahead of time and used Google to translate them to Polish. When I encountered people in these villages, I handed them a piece of paper with my translated questions. I still had to understand their responses, but most of my questions were yes/no questions or allowed them to literally point me in the right direction. Smartphones and WiFi are your friends. If you have access to the Internet, using Google Translate is an easy way to get quick translations for words or simple phrases when you’re talking with someone in another language. If you’re not sure you’ll have Internet access, download a standalone translation app that doesn’t need the Internet.

I confess that after a few shots of vodka, I was relaxed enough that it didn’t matter that my hosts Larisa and Sergio didn’t speak much English. Somehow their Russian seemed more understandable, and they seemed to understand my English better. (Of course, it helped that my friends, Jim and Marianna, were able to translate some of what they were saying.) Alcohol may or may not be your thing—but it certainly seems to help one relax and make our conversation flow better!