On my first day in Dakar, my blonde, wide-eyed newness made me a magnet for every street vendor trying to sell something. They followed me persistently; I couldn’t shake them.

On my last day in Dakar 10 days later, my walk down the street was a much different experience. I’d learned the secret.

Engaging with street vendors in the hope that a firm and persistent, “No thanks,” would persuade them that I wasn’t interested was the mistake I made the first day. 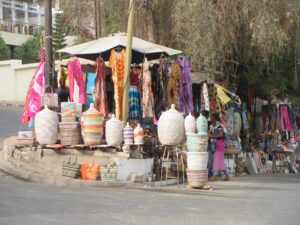 By the tenth day, I found that the secret to a peaceful walk through Dakar was to surround myself with a bubble of obliviousness. They’re simply not there. I didn’t hear them. I didn’t see them. I didn’t acknowledge them even by ignoring them. They were irrelevant. I was caught up in my own thoughts, my own destination.

It worked like a charm (even better than barking at them in German, which I also had a small bit of success with). After their “Hello, Madame,” was met with obliviousness, they simply melted away and looked for someone else.

It’s a shame really. When I visit a new place, I like to be engaged. I like to observe everything and everyone around me, trying to absorb the culture. But when engagement means harassment, obliviousness is a welcome relief. I’m so glad the annoying merchants weren’t my only exposure to the people of Senegal and that I got to meet colleagues at the meetings I was attending to have an appreciation for the warmth and friendliness of the Senegalese people.

My bubble of obliviousness also allowed me to pay more attention to walking, avoiding the sidewalk obstacles—trash, cement dissolving into sand, someone sprawled out sleeping.

Although I’ll never look like a local in Dakar, walking down the street without being harassed made me feel like a local—even for a day.