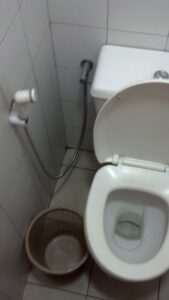 A public toilet in Senegal, but what is the spray attachment used for? To clean the toilet? A portable bidet? One wonders.

Toilet customs can be mysterious.

I never thought so growing up. You did what was necessary, dropped the toilet paper in the toilet, and flush. Simple. Even the occasional outhouse encountered during family vacations was just a variation—toilet paper, drop, and then (no) flush.

But then I began to travel.

The first variation of toilet customs I encountered was the “crunchy” toilet paper used in Europe in the ‘80s. Not quite what my tender parts were used to, but not a radical concept. The unisex toilets in France I discovered on that same trip were a little bit more startling to me.

Squat toilets came into my life when I moved to Greece. These were harder to get used to, but I came to (figuratively) embrace them, even like them. I thought they were more hygienic than many public toilet options since no part of me except the bottoms of my shoes actually touched anything. I couldn’t understand why my visiting friends were so squeamish.

Squat toilets also prepared me (and my thigh muscles) for traveling in rural Ukraine, where there were often no toilets at all (still requiring the squat position, just without any plumbing involved). After adapting to this, discovering toilets in Latin America (and in Greece and Ukraine) where you disposed of the used toilet paper in the garbage rather than in the toilet seemed like a minor inconvenience. (Although I do remember one travel companion shrieking, “Are you kidding?” But I knew they really weren’t kidding—it really does clog up the inadequate sewers.)

But I’m still puzzled by the public toilets of Senegal. The first, in a roadside gas station, was pretty awful, but I am skilled at not allowing any part of my body to touch any part of the facility. The toilet didn’t flush, so I assumed I should follow the Latin American/Greek/Ukrainian precedent of disposing of the toilet paper in the small garbage pail next to the toilet.

Miles down the road, that toilet paper haunted me. In a land where water supply can be an issue, it occurred to me that the “garbage” pail might actually have been a water container used to flush the toilet manually. Unfortunately, this option occurred to me only after I saw several much nicer public toilets with similar pails near the toilet…and in some cases, filled with water. Maybe I committed a toilet faux pas, and there’s a Senegalese gas station owner thinking, “Those Americans are so disgusting, throwing used toilet paper in the water pail.”

Just when I thought I’d become a world class traveler and toilet user, I think I committed a toilet faux pas.