I love road trips. There’s nothing that says summer to me more than the open road ahead of me and several days of driving. 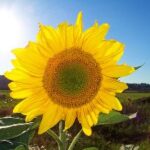 Growing up, travel was defined for me by our family trips to North Dakota and Minnesota to visit the aunts and uncles and cousins. That made for some long days of driving, all by my dad as the sole driver in the family. To stay awake at the wheel all those hours…he ate sunflower seeds.

We all did. My mother and I would munch along with him, cracking shells and eating the tiny seeds inside. It seemed completely normal to me that opening the car door at a rest stop resulted in a shower of shells. And that we could have lively conversations about where we’d bought the best tasting seeds and whether salted or unsalted were better.

I didn’t know it at the time, but it turns out this is part of my German-Russian heritage. The German-Russians in North Dakota where my parents grew up were known for eating sunflower seeds, sometimes dismissed as “Rooshin peanuts” by their neighbors. Though sunflower seeds are native to North America, explorers took them all over the world, including Russia, where Russian agronomists were the first to develop agricultural hybrids. These hybrids returned to the U.S. with German and Russian settlers (like my grandparents and great-grandparents). 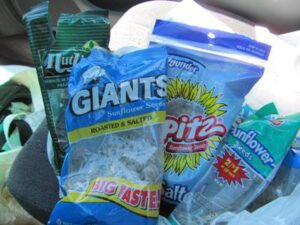 I’ve adopted my dad’s habit of eating sunflower seeds while driving. I don’t know why, but it works better than caffeine for keeping me alert. On a recent road trip to California, I decided to do a taste test of different brands. I was even sort of scientific about it. I ate each brand for 10 minutes at a time, then cleared the palate with water before switching to the next.

The clear winner:  Giants seeds from North Dakota for their fresh flavor, consistency in taste, and for not being too salty. But they can be hard to find out west; I had a cousin from North Dakota bring a bag for me to our family reunion in California.

Second place:  Nutline seeds. Despite their English name, I bought these in Moldova (another place my German-Russian ancestors lived). These also had a fresh flavor, with an occasional seed having an especially great toasty flavor. But they were saltier than the Giants seeds and the salt made the shells feel a bit rough (though not unpleasantly so). These are obviously a lot harder to find in a store (unless you’re in Chisinau). But it was fun comparing seeds from the old homeland with the North American homeland!

Third place:  Frito-Lay seeds. They’re easy to find everywhere and their taste is fine, just less fresh and more processed than the first two. They seem to have frequent bad-tasting seeds in each package. They’re quite salty and the seeds are smaller than the others.

Last place:  Spitz seeds. Easy to find in every gas station mini-market, these are really bland in flavor, sort of a “why bother?” taste. They do get extra credit for smart packaging though. Their bag had a ziplock top. Once opened, all the others tended to spill seeds all over the car seats.

What I Didn’t Taste 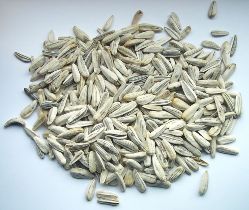 I didn’t include flavored sunflower seeds, like Chili Lime or Dill Pickle. I guess I’m a sunflower seed purist, but these are just wrong. The so-called flavor is just an additive to the salt on the outside of the shell so you can suck down more salt. Blech.

I also didn’t include sunflower seeds from Ukraine, the part of “Russia” my ancestors came to North Dakota from. These are found everywhere in Ukraine; lots of babushkas selling them on the streets of Odessa. These seeds are tiny, with thin brittle shells. When you crack them, itty bitty shards of shell fill your mouth, forcing your tongue to pick out the tiny seed amidst the shell fragments. These may have been the basis for the sunflower seed custom, but they’re no pleasure to eat.

I did a less scientific, but more thorough, test last year on a longer road trip to/from South Dakota. Just so I don’t leave out those brands….

Dakota Style was a winner above even the Giants from North Dakota. But I only found those in one (very small) gas station in South Dakota near my cousins’ ranch, so availability is a problem for me in Seattle. Planters seeds were similar to the Frito-Lay seeds, though slightly less tasty. The David brand seeds were okay, similar to the Spitz seeds. The Fisher sunflower seeds were a clear loser. I dumped those rather than eat them.

Am I sunflower seed crazy? Maybe so. But I’d rather think of myself as a connoisseur with a discriminating palate for excellence in seeds.

8 Responses to “Connoisseur? Or Crazed About Seeds?”