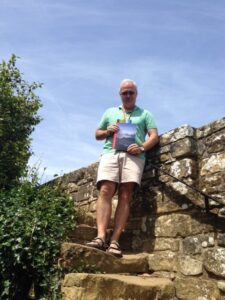 Scott on the ramparts of Battle Abbey

Guest blogger Scott Billigmeier is a California native who has lived in the suburbs of Washington, D.C. for 25 years. He’s been researching his genealogy for 30 years. Scott is a strategic account executive at Symantec (Veritas) focused on the U.S. public sector. He received his B.A. from U.C. Santa Barbara and has done Masters-level course work at U.S. Army War College and The Wharton School, University of Pennsylvania.  He is married and has twin daughters who are currently attending college.

It was a bright, crystalline day in southern England. The kind that you can never set your watch by but when they come, oh my, they are brilliant. Warm but not hot, and mediated by a fresh, exhilarating breeze that keeps the occasional wispy cloud moving jauntily across the sky.

This was the day that found our family heading to the southern coast and the ancient town (now city) of Hastings. My mother’s maiden surname was Hastings and it had always been supposed, without a great deal of thought, that this place was where our people came from sometime in the distant past.

Most of what my mother and her family knew and passed on (which wasn’t much, with one great exception) turned out not to be true or was completely wanting of any evidence. In the case of Hastings though, it remained plausible and the evidence was helpfully scant (if you wanted to believe) before the 17th century. All we knew for sure was that our immigrant ancestor left Ipswich, Suffolk, in April 1634 for the Massachusetts Bay Colony.

As an amateur genealogist coming up on 30 years, I knew a surname had to come from some place or characteristic and if you were lucky enough to have one based on a location such as Hastings, that was a natural place to look. 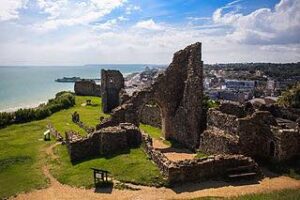 The ruins of Hastings Castle. (Courtesy of Wikimedia Commons)

Hastings has been pillaged, burned, rebuilt (repeat several times), and bombed during two world wars. Over a millennium of hard living had taken place in that coastal spot. Even the once remarkable port wasn’t viable any longer and hadn’t been for 600 years. The ancient Hastings Castle, which sits on a hill overlooking the old town, has mostly fallen into the sea. The tidal line has been rather elastic over the centuries covering or eroding the lower recesses of town. All of these things conspired to lower our expectations for what we might find.

And so it was that I found myself approaching Hastings on the A21 and admiring the beautiful countryside. The road is being turned into a motorway which will make Sussex more accessible, but is disturbing some fine views. High-speed rail is also planned, which will make the commute to London, where housing is tight and ultra-expensive, much more reasonable. Depending on one’s perspective then, the area is either on the cusp of a renaissance or obliteration.

I tend to think that making Kent and Sussex more accessible portends unwanted and unstoppable change so I was glad to be visiting now before it’s too late. In fact, as we passed signs for Churchill’s Chartwell, Kipling’s home known as Bateman’s, and numerous castles and abbeys, I wished I had made the trip a decade or two earlier. 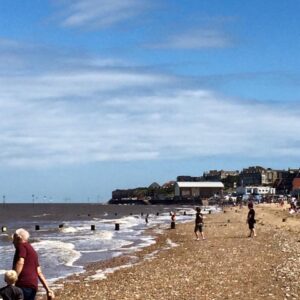 We arrived in Hastings and found our surprisingly chic accommodation just off the High Street in the small, old town nestled between the castle ruins and an adjacent cliff that has been set aside as a park. First impressions were positive (especially those of our twin daughters) and they mostly held during our four-day stay.

Hastings today, and for probably as long as anyone cares to remember, is about the seashore. It is a resort area with a strong fishing tradition. To my surprise, virtually everything about the Battle of Hastings has been relegated to the nearby battlefield, the majestic ruins of Battle Abbey that sits on the place where King Harold was supposedly slain, and the town of Battle that sprung from history’s fertile soil.

For these reasons and others I suppose, I felt strangely detached during our visit; more tourist than amateur historian or genealogist. I attribute that to the speculative nature of the family connection to Hastings and Sussex—logical, plausible, but unproven and unprovable at this remove.

The historic core of Hastings is better preserved than I expected with exception of the sad old castle ruin. Buildings dating back to around the 14th century are mixed in with later creations. The medieval churches of All Saints and St. Clement’s provide the religious continuity that is lost on most of today’s inhabitants and visitors. The bomb damage from World War II is only apparent in a few places and, interestingly, it’s attributed to “enemy” (not German) bombers. One mustn’t agitate the continental tourists! 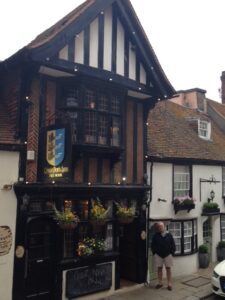 Walking down the narrow High Street toward the English Channel is a short but pleasant stroll. George Street is on the right and it’s arguably the epicenter of Old Town. It shares and amplifies the characteristics of Hastings and most seaside resorts in the U.K.—attractive but a bit shabby, aromatic in a way that harkens back to the days of chamber pots, and striving for something greater than the sum of its parts or perhaps the halcyon days when people traveled here to take the water and enjoy the spas. We enjoyed George Street and were often drawn back to it, but we were always careful where we stepped and, like anywhere in Hastings, aware of the ever-present dive-bombing seagulls.

Hastings isn’t a place that venerates its past for any reason other than to propel itself to a more prosperous future. If you’re in town to see the sites of the BBC’s Foyle’s War or where the Rockers and the Mods were whipped into a frenzy by the Rolling Stones in 1964, then you are in luck!

I didn’t come to Hastings expecting or even hoping to find things of direct family relevance. Sometimes you just have to go and get the vibe of the place and that I did. As for emotional connection, it was akin to visiting my ancestral village in Germany. I knew my ancestors had lived there and yet their imprint was indiscernible or long ago erased if they ever left a mark.

A contrasting ancestral visit was to eastern and central Massachusetts several years ago. Family still lived in the area, three hundred year old family homes still stood and everywhere I turned, there seemed to be a road or a hill named after some ancestor. That is what we all hope for when we make such a trip “home.”

As for Hastings, it was and is an incarnation of home. If one takes time to reflect, it is what you make it to be through the mist of the past.

(Read more In Their Footsteps stories)

2 Responses to “You Can Go Home Again”