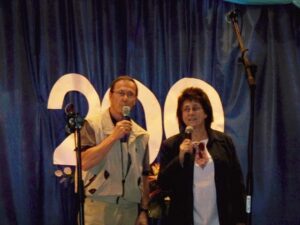 Guest blogger Merv Weiss began researching his family’s history in the year 2000. All four of his grandparents were ethnic Germans (Catholic) who were born in a region that was once Russia (now Ukraine). His paternal family has roots in the Odessa region, his mother’s family in Crimea. Merv recognized that genealogical research requires a good foundation in the history and geography of one’s ancestral regions, and has visited Ukraine six times. He’s also visited Weiss relatives (Spätaussiedler) in Germany numerous times. His greatest satisfaction in genealogical research to date has been meeting his “new” cousins in Germany. Merv grew up in southwestern Saskatchewan, and lives today in Saskatoon.

The expression “once in a lifetime” is perhaps over-used, but Sunday, 21 September 2008 was, for me, truly a once-in-a-lifetime experience. After all, a 200-year jubilee can only occur once. The year 2008 marks the passage of two hundred years since the first Rhineland Germans ventured into the Kutschurgan Valley, Odessa district, having been enticed there by the promises of Tsar Alexander I. The Germans built six villages there, which served as the foundation of their culture and Catholic faith for 136 years. The central economic and administrative center for those villages was the village of Selz, today called Lymans’ke.

Selz is special for me, because it is the birthplace of my father’s parents. My grandparents married there and had three daughters before they immigrated to Canada in 1913, the peak year of outward migration of Germans from South Russia. They sang in the choir of that great cathedral, the Church of the Assumption, which today exists in a sad state of ruin and neglect. My grandmother’s direct ancestor, Michael Fetsch, was the first mayor of Selz, and her second cousin, Alexander Fetsch, was the last German mayor of Selz. Selz was home to the Weiss and Fetsch families for five generations before my grandparents, Konrad Weiss and Brigetta Fetsch, decided that the unknown of North America was a better option than the growing turmoil of South Russia. 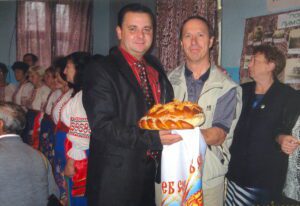 Merv is greeted with the traditional Ukrainian gift of bread and salt by Lymans’ke’s mayor, Mr. Zharikov.

Selz has survived, but it has endured much. Once considered the most prosperous German colony in Odessa district, the village today looks poor and beaten down, by North American standards. It still holds bitter memories for those Germans whose families remained behind. There are many yet who remember the onslaught of a new economic order in the 1920s, the persecutions and banishments of the program to collectivize agriculture, the Holodomor or great famine of the 1930s, Stalin’s great terror campaign of 1937/38, and the final abandonment of their villages in 1944. I can feel the burdens and pains of those years still today as I walk the streets of Lymans’ke. The tired-looking homes still seem to weep for their former German inhabitants. The flocks of ducks and geese wander and quack and honk, as if they still wonder, “Where did they go?”

My visit in 2008 was my fourth to my ancestral village, and I now enjoy the comfort of familiarity when I am there. I was in Selz on this day to help the village celebrate its two-hundred-year jubilee. I remember reading Konrad Keller’s description of the Kutschurgan villages in 1908 when they celebrated the toils and accomplishments of 100 years of German colonization. I imagined the pride the Selz people must have felt for their new and beautiful cathedral. But throughout the day I could not quit thinking about the sad and tragic history of the second one hundred years, as those Germans were beaten into serfdom and dragged through thousands of miles of Europe and Siberia and Asia. But this was 2008, and I was in Selz, and we were there to celebrate.

Light rain throughout the day, following a week of rain, obscured the many preparations by the residents of Lymans’ke to clean up their town, to clean up the church grounds, to put up anniversary banners and balloons. But it was obvious from the moment we arrived on Sunday morning that this was no ordinary day in Selz. People with and without umbrellas were wandering everywhere on the streets around the old church. Inside the church, several hundred people had gathered, waiting to celebrate Holy Mass. Once again, the cathedral walls echoed with the liturgy and the songs of the Holy Mass in German and Latin. And as I received Holy Communion, how could I not think about my grandparents doing likewise in the very same spot? 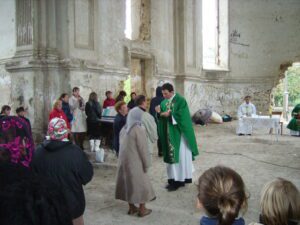 Merv receives communion in the cathedral where his grandparents had married.

The church service may have started late, but the parade band struck out at precisely 11:00 am, interrupting my reverie inside the church. We followed the band to the “Palace of Culture,” an old Soviet term for what we would call a community theatre. An extensive program of entertainment interspersed with presentations and speeches would fill most of the afternoon. People stood in the aisles and entrances long after the five hundred seats had been filled. I was one of the several guests of honor, presented with the traditional loaf of bread and salt (called korovai) on a cloth. I was interviewed by television and newspaper reporters from Odessa and Kyiv, interested in speaking to a North American descendant of original Selz colonists.

When it was finally my turn to speak, there were many things I wanted to say. Of course, most of the day’s program reflected the area’s Ukrainian and Russian character and history. But I was very grateful that the people of Lymans’ke were recognizing the German colonists who first ploughed this land, and built this village. What I wanted most to say was to tell the people that my grandparents loved Russia. They did not leave because they hated Russia. Russia was their motherland, but when they recognized the changing character of Russia’s internal politics, they left. They left for a huge unknown on the Great Plains of North America, and the new beginning had many challenges and obstacles to overcome.

And I wanted to tell the people of Lymans’ke, that even though I was born in Canada, my roots have led me back to the Kutschurgan Valley. I am as German as the people who came to this valley in 1808, and I am as German as the Germans who were forced to leave this village in 1944. This history is part of who I am, and I want my children and my grandchildren, and the people of Lymans’ke, to understand this about me. This history is why I came back to Selz to celebrate this jubilee. I am grateful that the friends traveling with me were able to share the day with me, and I know that they understood the relevance this day held for me. It is my hope, that in another 200 years, the people living in Lymans’ke will still remember the Germans who first colonized the Kutschurgan valley, and who built the village of Selz.

(See more In Their Footsteps stories)

2 Responses to “Once in a Lifetime”