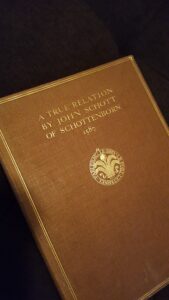 There are several theories for the origin of the name Schott. The one described by Johann Schott von Schottenborn in 1587 is that Schott ancestors originated in the town of Schotten in Hessen, Germany. He describes how his branch of the family left Schotten and settled first near Eisemroth, Hessen. They were smelters and forgers of iron goods for many years until the late 1100s when the country and forests were destroyed due to the wars of Emperor Friedrich Barbarossa.

Without forests to provide the charcoal necessary for iron smelting, the family scattered throughout Hessen. Johann Schott von Schottenborn’s ancestors settled in Braunfels, Hessen. As these families scattered, they would likely have been known as being “zu Schotten” or “from Schotten,” which would have eventually been shortened to using Schott as a last name.

Later critics of the 1587 Schottenchronik are Von Hartmann Pieper and J. Reinhardt Schott, Jr., who published an update to this document sometime after 1960. They warn that Johann Schott von Schottenborn’s work is based on oral tradition, not documented fact or church records that can be objectively proven. They suggest several other possibilities for the origin of the Schott name. One possibility is that any foreigner that was from Scotia (Scotland or Ireland) might have been tagged with the name Schott or Schotten whether or not they originated from the town of Schotten. They believe that it would have been very common for a foreigner to have been singled out even before last names were commonly in use.

Pieper and Schott also suggest the possibility that Schott was a variation on a word for peddler or merchant. Another possibility is that it came from a medieval first name, Schotto.

While it’s true that there are many possibilities for the origin of the name and that the genealogical facts in Johann Schott von Schottenborn’s 1587 document are based primarily on oral tradition rather than documentation, there are a number of pieces of evidence that would seem to (at least partially) support his opinion.

A number of Schott family branches in various locations had coats of arms. While none of these are the same, many of them have similar objects on them—most commonly showing a pod or bundle of pods. (In German, a pod is a Schote—possibly a play on the name Schott.) This could indicate a connection among Schott families in many locations.

Johann Schott von Schottenborn mentions three Schott brothers who scattered from Eisemroth first to Worms, then to the Strasbourg area in the early 1200s. Other documents from the 1500s corroborate that there were indeed three brothers named Schott during this time in Strasbourg who had come from Worms. One document would have been in an archive that it is unlikely Johann Schott von Schottenborn would ever have seen; another was published after his death. So although his information may not have been 100 percent accurate, there is evidence that supports at least some of it. 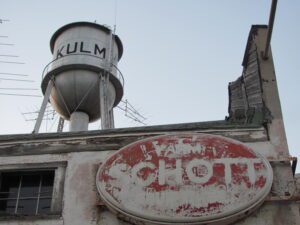 My branch of Schotts ended up in Kulm, North Dakota.

Literacy and written documentation were rare in those days compared to today’s society. Much information was passed on through oral tradition, so it doesn’t seem unreasonable to believe that Johann Schott von Schottenborn’s information has at least some truth to it. As Sir Samuel Haslam Scott says “The account of the successive generations … and of the derivation of the surname … depends on oral tradition. But the tradition is at any rate venerable, and in the opinion of such an authority as Mr. Oswald Barron it presents an example of the genuine family tradition with no inherent improbability, in contrast to the ordinary family myth so distrusted by the genealogist.” [Note: Oswald Barron was a noted British authority on heraldry and genealogy.]

Therefore, it seems plausible to believe that a great deal of the 1587 document could be accurate, including its speculations on the origin of the Schott name, although it can’t be proven with complete assurance.

As Sir Samuel Scott concludes: “The name [Schott] is an old one, but it is not a distinguished lineage, nor is it an eventful record. The lives of the estimable make a less exciting story than the dramatic villainies of the unscrupulous.”

Pieper, Von Hartmann and J. Reinhardt Schott, Jr. Die Schottenchronik. Published sometime after 1960. [This is another version of Johann Schott von Schottenborn’s family history. This one is based on the original manuscript, rather than the F.E.G. Arnold version, which was based on a copy. These authors make a lot of the fact that the early Schott family history is based on oral tradition, and can’t be verified in any way and therefore, should not be relied on. They also claim that their version is much more accurate than the F.E.G. Arnold version because it’s based on the original, not a copy. While I certainly found some discrepancies, I would say these are minor. These authors, however, have added to the original with information from other sources, which makes this version more complete overall.]

6 Responses to “The History of the Schott Name”