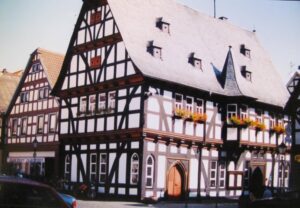 The town of Schotten is said to be the place of origin of both the Schott family and the Schott name sometime between the 11th and 13th centuries. The official history for the town of Schotten, Germany, is that an early document mentions a church “ad scotis” or “of the Scots” that is one of eight churches that Abbot Beatus bequeaths to the monastery Honau by Strasbourg. It is thought that this is likely to have been the first church in Schotten, which was built by Irish-Scottish monks.

This church probably grew, and by 1050, the first Roman Catholic church was built. Then, in the 1300s, the original Liebfrauenkirche (which was still in existence in 2001) was built in the town of Schotten.

A slightly more romantic version of this story is described in Johann Schott von Schottenborn’s 1587 family chronicle. [Quotes are from Sir Samuel Haslam Scott’s English translation.] This describes the origin of the village in 1015, when two Scottish princesses (Dickmunda and Adelmunda/Rosamunda) “founded at Wetter in the land of Hessen a nunnery.” 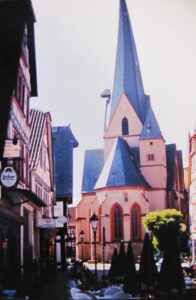 While the idea of Scottish (which may have actually been Irish) princesses wandering around 11th century Germany may seem improbable, there is evidence to support this. During a renovation of the church in Schotten in the 1700s, a parchment document dating from the 1300s was discovered which stated (in Latin): “anno 1015 after the birth of Christ in the reign of the King nicknamed the lame (Henry II, Emperor 1002 – 1024) two sisters from Scotia, one called Rosamunda, the other Dicmudis, began to build this town and our first church at Schotten.” There were also two wooden busts of these two sisters found in the church.

There were several “Schottenkirchen” (churches started by Scottish-Irish monks) in the Hessen area, all dependent on the mother church at Strasbourg. Florens, an Irish hermit, had been elected bishop of Strasbourg in 679. It’s likely that these two sisters were Irish, rather than Scottish, since Irish monks had been instrumental in spreading Christianity to the European continent, beginning with the work of St. Columban in 585.

(It’s also been speculated that these two sisters were the daughters of the Irish King Brian Boru, and that they fled to the European continent to do missionary work after the disastrous battle of Clontarf in 1014. However, there is nothing to substantiate this.)

According to Die Schottenchronik, the Schott family left Schotten in the late 12th or early 13th century and settled in other parts of Hessen.

Today Schotten is a modern town and well-known vacation spot for sports enthusiasts.

Cahill, Thomas. How the Irish Saved Civilization. Bantam Doubleday Dell Publishing Group, Inc. New York, 1995. [More about the Roman Empire and the Irish than Germany, but it does give some background on why those Irish missionaries would have been wandering around founding the town of Schotten, Germany.]

Pieper, Von Hartmann and J. Reinhardt Schott, Jr. “Die “Schottenchronik.” Published sometime after 1960. [This is another version of Johann Schott von Schottenborn’s family history—this one is based on the original manuscript, rather than the F.E.G. Arnold version, which was based on a copy. These authors make a lot of the fact that the early Schott family history is based on oral tradition, and can’t be verified in any way and therefore, should not be relied on. They also claim that their version is much more accurate than the F.E.G. Arnold version because it’s based on the original, not a copy. While I certainly found some discrepancies, I would say these are minor. These authors, however, have added to the original with information from other sources, which makes this version more complete overall.]

7 Responses to “Schotten, Germany: Land of My People”