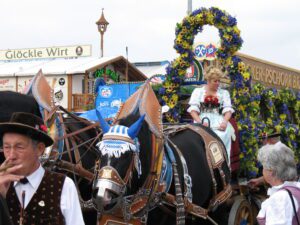 The locals were wearing beautifully crafted traditional costumes while the tourists (like me) wore jeans.

In September, my thoughts turn to Oktoberfest even though Americans usually think about Oktoberfest in, well, October. But in its German homeland, Oktoberfest begins in September. (Something about wanting good enough weather to be able to drink beer outside.)

For years, Oktoberfest in München was not high on my list of travel priorities. A friend who lived there told me how monotonous it was to commute with people vomiting on the U-bahn (subway) every day of the two-week festival.

But I was visiting a cousin who lives near München but had never been to the king of all beer festivals. He was eager to go, so we did, and I discovered that many of my preconceptions about Oktoberfest were wrong. (Alas, not the ones about people vomiting on public transportation.) 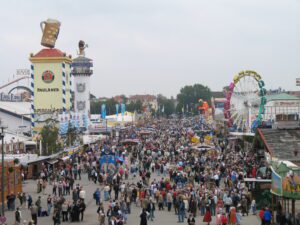 Coming off the train in München, we discovered the best way to find the Wiesn (fairgrounds) was simply to follow the trail of lederhosen and dirndls. The locals really DO wear these traditional costumes—it’s the cool “in” thing, not something touristy (which I’d expected). The tourists were all wearing jeans like me.

These outfits were beautifully crafted, hand embroidered, and expensive—the local equivalent of black tie. Then there was the occasional shock of seeing the “bad girl” dirndls—very short, very low cut, high lace-up boots. I found myself wondering if they were starring in an adult film called “Dagmar Does Düsseldorf.”

Oktoberfest was fascinating—part county fair (there was a whole section of amusement park rides and games), part major sporting event (vendors walking around hawking brezels and t-shirts while people wear hats and gear from their favorite “teams,” which in this case are the different beer tents), part drunken beer bash.

The county fair atmosphere and presence of families surprised me. Of course, instead of cotton candy and elephant ears, the food booths had currywurst and magenbrot. Since magenbrot translates to “stomach bread,” I was a little reluctant to try it in case it was the internal organ of a small, defenseless animal. I was relieved when it turned out to be a ginger cookie.

And they were apparently a different type of cookie than the enormous ones hanging around people’s necks with sayings like “Liebchen.” This is obviously a fashion accessory one would only wear (and gnaw on) when drinking copious amounts of beer.

Some beer tents are small and calm where you can get an excellent meal, craft beers, and chat with the locals. My cousin and I had lunch with an older woman who came to the same cozy beer tent and same table each day of Oktoberfest, simply because she enjoyed their food. She and my cousin ended up trading sauerkraut recipes.

Other beer tents hold 10,000 people and are exactly what one thinks of for Oktoberfest—loud music at an out-of-control frat party with people standing on tables and drunk businessmen in suits chugging beers. The women servers plow through the crowd, their wrists somehow supporting six liter-sized mugs in each hand, as they shout, “Vorsicht!” but never pause in their relentless quest to deliver beer.

I’d expected a drunken beer fest, and Oktoberfest was that (especially late in the evening). But it was also a community event, the place to hang out with your family or sweetheart, the place to share tables with strangers and talk about life and exchange recipes. I think I need a dirndl.