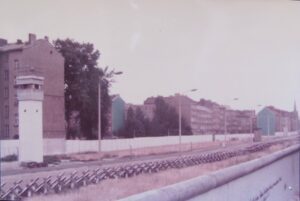 1983: The Wall is at the lower right of the photo. Behind the wall was a no man’s land to prevent people from escaping.

Even before I first saw the Berlin Wall in 1983, my Cold-War-era childhood filled with black-and-white movies of Soviet spies made it an ominous symbol of repression.

Along with a bus full of fellow recently graduated college students who were my travel companions in July 1983, I’d spent the morning seeing West Berlin with a local. She told us her story of waking up one morning in 1961 to find herself cut off from family members in East Berlin. She described how, even after they found ways to visit the East, meeting with relatives had to occur secretly to prevent them from falling under suspicion of the Stasi (secret police).

Now, our group of American 20-somethings faced Checkpoint Charlie, interested in visiting the Pergamon Museum and getting a glimpse behind the Iron Curtain. It was an eerie feeling crossing the open area between the safety of the U.S. checkpoint and the East German guard towers. We knew the stories of the people who had died trying to escape from East to West. And now, we were going the opposite direction. 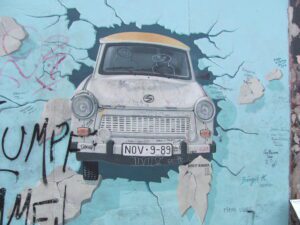 2015: Painting on a piece of the Wall showing a car breaking through to freedom.

Behind the Iron Curtain

The uniformed soldiers herded us into a small enclosed area and took our passports. One of the guys in our group, Dave, tried speaking German with the guards, but I shushed him, thinking the more we looked like stupid American teenagers, the better. We exchanged the required number of Deutschmarks, ending up with a ridiculous number of Ost-Marks that we knew we could never spend in an afternoon and weren’t officially allowed to take back with us.

I know that afternoon we visited a museum that was filled with classical treasures, but I’ve long forgotten those. What I remember most vividly about East Berlin in 1983 is the feeling of oppression.

I remember the somber faces of the people we passed on the street. I remember the couple on Alexander Platz who showed more than typical parental fear when their toddler ran joyfully toward our group of very obvious Americans. I remember the items in the department store, at least 10 or 15 years out of date compared to what was available to us at home.

And in a strange twist, I remember that we had probably the best meal of our six-week trip in East Berlin; dining in the best restaurant we could find in an attempt to use up all those Ost-Marks.

I remember the relief we felt to leave the dark, empty streets of East Berlin for the bright lights and traffic of West Berlin. I remember how reassuring and safe it felt to greet the American soldiers manning the checkpoint. I remember the sobering feeling that this walk to the West, so simple for us, was an impossible dream for thousands of people living in East Germany. 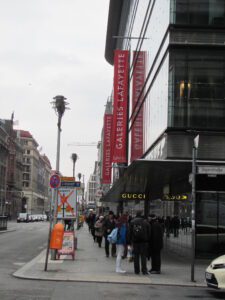 2015: What was once a drab street in East Berlin is now filled with upscale stores.

Today, Checkpoint Charlie is the center of crowds of tourists, snapping photos as they pose with German actors dressed up as U.S. soldiers. Painted chunks of the wall stand here and there—now centerpieces of art rather than a barrier that imprisons people who just want the freedom to live their lives.

The drab street I walked in 1983, making our way from Checkpoint Charlie to Unter den Linden (a well-known boulevard) and looking into store windows with merchandise that none of us were tempted to buy even as souvenirs, is now filled with upscale stores—Hugo Boss, Gucci, Galeries Lafayette.

In 1983 Berlin, our guide talked about the history of the city and the ruined Reichstag building. I remember being pleased at how clear his German was and that I could understand some of what he said even without the translator. 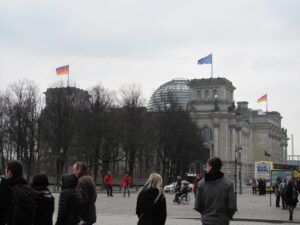 2015: The Reichstag building is now restored and seat of the German Parliament.

I snorted to myself thinking, “What a crazy dreamer. That will never happen.” I’d grown up never knowing anything other than a divided Germany.

In 2015, I walked through the restored Reichstag, once again the center of government of a united Germany.

Oppression can be defeated. Freedom will win out. Crazy dreams do come true.

3 Responses to “Berlin: Then and Now”