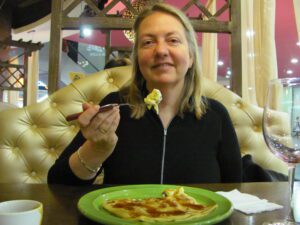 At long last, I sampled Lithuanian cottage cheese in a blintz-like dessert in Klaipeda

I’ve wanted to visit Lithuania since I was a teenager. And for once, it’s not because of family roots.

My interest in this small Baltic country dates back to high school in the 1970s, when Lithuania was firmly locked away behind the Iron Curtain. In fact, the Soviet Union had so thoroughly subsumed it, I almost thought Lithuania was a mythical place, like Atlantis or a land called Honalee.

This bit of trivia would be long forgotten, except that my 17-year-old self happened to be the news editor of the school newspaper. And I learned this bit of trivia just as we were working on our annual April Fools edition. And so one of our feature spoof stories became an article on the high school marching band traveling to Lithuania to march in the Cottage Cheese Festival parade. 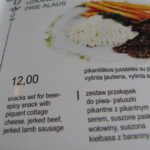 Cottage cheese was everywhere – in the desserts and as bar snacks

Then tragedy struck. Our teacher refused to let us print it, afraid we would offend local Lithuanians. My 17-year-old self was indignant, arrogantly knowing that there couldn’t possibly be enough of these mythical creatures around to be offended. I knew this was censorship. The downfall of civilization was sure to follow. (My now adult self is highly embarrassed by my 17-year-old self and I apologize to Lithuanians everywhere for my thoughts.)

The teacher suggested a compromise—we’d use Curdania, rather than Lithuania, as the country name. But my 17-year-old self was a bit sulky, convinced the article wasn’t a worthy April Fools story with this edit. I used my editorial privilege to pull it.

(Of course, my current self is relieved by that teacher’s journalistic integrity as it prevented me from offending Lithuanians everywhere, which, I’ve discovered, include several long-time friends and my contact lens technician).

This journalistic drama has remained with me decades later, piquing my interest in Lithuania when most people, even today, can’t find it on a map. So when a friend invited me to visit her there, I was determined to seek out the truth once and for all. Do Lithuanians really love cottage cheese?

The answer is a resounding yes. Lithuanians do indeed seem to love their “varske.” Varske recipes abound.  Restaurants serve it in dessert and in pancakes and as side dishes. Sellers at the farmers markets have different varieties.

Cottage cheese in Lithuania is not a laughing matter, any more than sauerkraut in Germany or spaghetti in Italy or potatoes in Idaho. 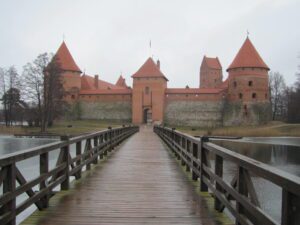 But I also discovered something so much more important—Lithuania is a country with a proud heritage.

The Duchy of Lithuania was a major power in Europe for five centuries (13th to the 18th), and the biggest kingdom in Europe in the 15th century, with great diversity in language, religion, and culture.

Lithuania’s declaration of independence in March 1990 created a domino effect among the other soviet republics … which ultimately resulted in the breakup of the Soviet Union. Lithuania continues to be feisty, one of the few EU countries to continually stand up against Putin’s aggression in Ukraine. 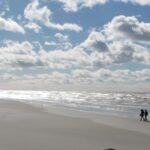 The shore of the Baltic Sea off the Curonian Spit

In addition to politics, basketball is big in Lithuania. When the Soviet Union won the Olympics gold medal in 1988, the majority of the team was Lithuanian. In 1992, little Lithuania’s first year to compete in the Olympics as an independent country, the Lithuanian team won the bronze. 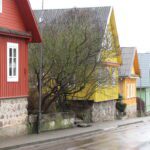 I went to Lithuania in search of cottage cheese because of a silly teenage experience. But instead I found that Lithuania is a country with beautiful nature, centuries of history, a love of sports, and a spirit to stand up for justice. I am humbled.

4 Responses to “A 36-Year Search for Cottage Cheese”