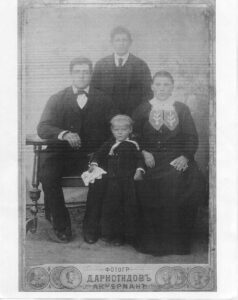 My Grandma Lydia was just 4 years old when her parents brought her to the U.S., an immigrant from what was then the Russian empire.

She was pretty lucky compared to today’s Dreamers. Laws about entry were a lot vaguer, no passports required. Germans from Russia were often sneered at as “Rooshians,” but she lived in an area mostly made up of fellow immigrants from Russia, so hatred and discrimination didn’t really touch her daily life.

She grew up as an American—celebrating the 4th of July in small town North Dakota, gaining an American appreciation for the importance of education for her children. She and my grandfather built up a farming business that included land in four counties and pulling a family of 12 through the Depression. She was known throughout her community for her generous spirit and inviting more people than would fit in the house over for chicken noodle soup after Sunday church services.

Her children and grandchildren and great-grandchildren include entrepreneurs and teachers and farmers and a NASA engineer and bankers and artists and accountants and medical practitioners and technology professionals and police officers. A solid contribution to the lifeblood of America.

What if at age 26 (average age of a Dreamer), she’d been forced to go back to Russia? The year was 1917, when Russia was in turmoil from revolution. Knowing no Russian, schooled in the American “work hard and you can achieve your dreams” ethic, instead she would have lived her life under the repression of Lenin and Stalin, the starvation famine of the Holodomor, and possible deportation to Siberia or Kazakhstan.

Her American dreams would be dust, her life uprooted and thrown into the chaos of an uncertain future by petty people who made the cruel decision that this generous and loving woman was somehow taking something away from them. Cruel, petty people who decided that Grandma Lydia’s ability to thrive in this land where her parents brought her was damaging America rather than building a family and farm business that contributes to its greatness.

The C in DACA stands for children, not criminals. Children innocent of any illegal acts by their parents. Children who are part of the fabric of this nation as they become entrepreneurs and teachers and medical practitioners and technology professionals.

The C in DACA stands for children, not criminals. Children should be nurtured and encouraged to achieve their dreams, not kicked aside to fend for themselves in a culture they know little about simply because of the mistakes of their parents.

The C in DACA stands for children, not criminals. Dreamers are not the criminals here. That label belongs to the cruel, petty people who would deny them their ability to go to school and earn a livelihood.

So you, too, must show love to foreigners, for you yourselves were once foreigners in the land of Egypt. (Deuteronomy 10:19, NLT)

A few facts in case you’re thinking “Yes, but why haven’t they become citizens?”

(My thanks to my friend, Rusland Westerlund, whose words inspired this post: The C in DACA stands for children, not criminals.)