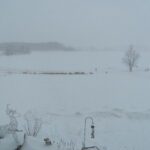 If you’re stuck in a blizzard, there are worse places to be than a cozy house overlooking a snow-covered lake, with internet access, satellite TV, and a well-stocked freezer and pantry. My ancestors who settled on these prairies had a much tougher time when they encountered blizzard conditions—crammed together in a sod house, the sheet of white outside making it risky to go a few steps to the barn, limited food, and no handy weather.com to predict the end of this storm or the beginning of the next.

They had to rely on their stockpile of cow chips or twisted grass or (if they were lucky) coal to last throughout the winter. For me, in a blizzard on the edge of North Dakota in 2010, well, it actually got too warm in the TV room while we were watching a football game and we had to open the door to the deck to let in some of the below-zero air for a few minutes.

So I shouldn’t complain. But the whole reason for me coming to North Dakota/Minnesota in the depths of winter was for a family wedding that I’d really looked forward to. A wedding in a town only 30 miles away. But it might as well have been 30,000 miles because a blizzard had closed down all the highways between us and Detroit Lakes. And even those closed-down highways were several miles of unplowed, snowy gravel roads away. Our attention was almost hypnotically centered on the weather forecast. Where was the storm? Which direction would it go? Would we really get a break between blizzards on Friday? If so, would the highways open? If open, could we get to them?

Friday morning the family texts started flying. The cousins to the west—completely snowed in with two feet of snow. The cousins to the east—inching their way over icy county highways, transporting 4 of the 5 bridesmaids. We watched the news and when we got the five minute notice that the county road between us and Detroit Lakes was open, we finished up our packing and got the 4-wheel-drive pickup ready to hit the road. My cousin’s husband had already spent an hour plowing out the driveway.

As we drove, I looked out at the clouds of fine snow billowing and blowing sideways across the plains. Vast expanses of white, hiding any definition of the landscape or the road. Bitter and deep cold.

I’m in awe of the majesty of the prairie in the spring, summer, and fall. But I’m intimidated by the prairie of the winter. The unbroken whiteness is a reminder that this is a land not to be taken lightly. I admired even more the perseverance of my ancestors who settled in this land and made it a home.

We arrived in Detroit Lakes ahead of blizzard #2, just a couple hours ahead of the highway being shut down again. There was no way in or out for the rest of that day or the next. But we were where we needed to be, at least for that day.

I should have felt more frustration or anger throughout our blizzard watch. I’d come 1,500 miles in winter just for this wedding. For 48 hours of watching and waiting, there was a good possibility I would be just 30 miles away, but unable to get there. But I felt calm the whole time. The weather was clearly out of my control, an enormous and dramatic power I couldn’t hope to coax to change. I could merely watch its path and wait. There were decisions to be made on when and if to try the roads, whether the truck could handle them, where snow may have drifted too deep on unplowed roads, what to do if we got stuck in these bitter temperatures. But I was with cousins who knew the land. They clearly had much better knowledge of the situation than I ever could, so I just put myself in their hands.

Funny how easy it was to be at peace about getting to this wedding, releasing control of this frustrating, helpless situation. Why is it so easy to trust my cousins’ knowledge of Dakota winters, yet sometimes so difficult to wait and trust in God’s powerful and complete knowledge of my life? A Dakota blizzard reminded me of the comfortable peace waiting for me when I trustingly release control of what is not possible for me to control into the ever more capable and knowledgeable and powerful hands of God.