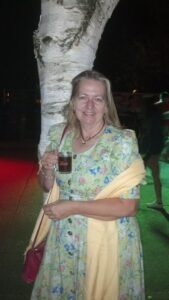 As I’ve become obsessed with the news from Ukraine, first the Maidan revolution and now Russia’s invasion, I’ve found I can turn almost any conversation with any group of people into a discussion about Ukraine and its politics. And so I’m often asked, “Are you Ukrainian?”

The correct answer would seem to be no. No, that’s not my heritage. No, I don’t know Ukrainian customs, don’t paint Easter eggs, never called my grandmother “Baba,” don’t have a closetful of brightly embroidered blouses.

Ukraine and the Ukrainian people are in my heart. They’re not my peeps … but they are. So it seems disrespectful to say no, I’m not Ukrainian. And yet, it seems presumptuous to claim that heritage. A couple of weekends ago, I solved the dilemma by embracing all sides of my heritage. One night, I went to Oktoberfest, wearing a dirndl and drinking German beer. The next day I went to a protest against Russia’s military aggression, draped in a Ukrainian flag and defiantly claiming that Russian-occupied territories are still Ukraine.

So I guess it’s not really that ambiguous. I’m Ukrainian. I’m German. I’m American. It all fits together somehow.