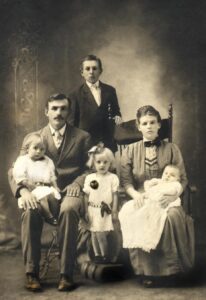 Photo was circa 1914, based on the ages of my aunt and uncles in the photo. Wesley is standing in the back.

I know he existed. But where did he go?

One of our family mysteries is Wesley, an orphan boy that lived with my Schott grandparents sometime in the early 1900s. The family lore is that my Grandpa Peter “went to the train station” to pick him up, that he was a bit wild, and that he died when he fell off a horse, hitting his head on a rock because his feet were stuck in the stirrups. The story about him being “wild” is either connected to the fall, or the story that he used to load my young aunt and uncles into a wagon and then have a horse pull them around the farmyard.

What I find so mysterious is that Wesley is not listed in the North Dakota state death index nor in the records of the Kulm Congregational Church, the Schott family’s church. Why wouldn’t his death be recorded in one of these places?

I have a photo, so I know he lived with my grandparents’ family in 1914.  In that photo, I’m guessing he’s between 10 and 13 years old (maybe a bit older if he’s not standing on something to make him taller).

He shows up on the 1915 North Dakota state census as “Wesle Schott.” That indicates to me that, whether they adopted him officially or not, they considered him a member of the family. But he’s gone by the next U.S. census, recorded in January 1920. 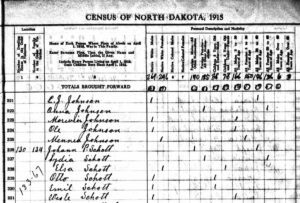 I know that I need to focus my search based on what I know, at least until I prove that it’s wrong. But I can’t help speculate.

What if he didn’t really die (since I can’t find his death record), but instead ran off and became a WWI doughboy?

Could he have come from the Orphan Train (based on the reference to my grandfather picking him up at the train station)? But when I contacted the Orphan Train Society, they could find nothing on him. Of course, I didn’t have much information to work with, not even his real last name.

Could he have been Catholic? Many of the Orphan Train riders were Irish Catholics from New York. And in the early 20th century, it might not have been considered proper to record the death of a Catholic boy in the records of a Protestant church. But, going back to what I’ve been told—that he died while living with my grandparents—I devised a plan to search the 1915 through 1920 issues of the local paper, the Kulm Messenger, while I was in Kulm for Easter this year. Even if his death didn’t get recorded officially, I’m sure such a tragic accident would make it into the paper.

Unfortunately, timing issues and snowy roads cut into my research time and I was only able to search one out of the five years I needed to look at. (Bad microfilm didn’t help my cause … being hard to read made it difficult to scan quickly and slowed me down.)

No luck so far, and the mystery continues to be unsolved. I self-medicated my disappointment with a Caribou dark chocolate mocha … and started making plans for getting myself back to North Dakota to keep searching.